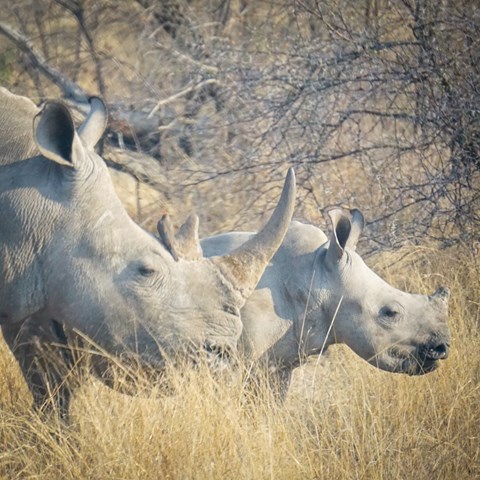 The earth's megaherbivores, large plant-eating mammals weighing at least a ton as an adult, are severely endangered. What happens if they disappear? We do not fully know, because our knowledge of how they affect their surroundings - and the whole earth – contains large gaps and biases. This is the major finding of a recent publication in Ecography by an international group of researchers. They synthesized the findings of all available scientific studies on the impact of megaherbivores on ecosystems. Now they are calling for more research.

Prehistorical losses of the earth's largest mammals are increasingly being linked to large - scale changes in the functioning of the earth. Grazing and trampling by extinct species such as mammoths and giant ground sloths affected the soil's fertility and carbon storage and reduced the incidence of fires. Their movements over large areas - even in areas with predators that smaller herbivores avoid - caused them to spread both nutrients and seeds via their faeces.

But what about the world's largest mammals that live today? What do we know about the impact of elephants, rhinos and hippos on the functioning of the earth?

– We know a lot, but we see that the knowledge is strongly limited to African savannah elephants, in a few places with a certain type of climate, says Olli Hyvärinen, doctoral student at the Swedish University of Agricultural Sciences, who worked together with researchers from Nelson Mandela University in South Africa and Utrecht University in the Netherlands.

Most research on African savannah elephant

Of the 240 available scientific publications on the impact of megaherbivores on their environment, which the researchers systematically synthesized, most are about the impact of the African savannah elephant on vegetation and biodiversity. The researchers believe that the reason why this species is so well studied is their growing populations in certain national parks in especially Southern Africa; more elephants in these areas drives the need for knowledge about their impact on the environment.

However, very few studies have looked at the effects of rhinos, hippos and giraffes in Africa, and of Asian elephants and rhinos. To gain deeper and broader knowledge about the role of these species in the world’s extant ecosystems, studies of more species and in more places are needed, the researchers say.

– Most studies are done in only a handful of national parks covering only a very limited part of the species' distribution areas. The consequence is that we only gain knowledge about their impact in a few types of environments and climates. We can therefore not use the knowledge to be able to predict the impact of the largest herbivores in the other environments where they occur and in future climates, says Olli Hyvärinen.

In his further PhD research, Olli Hyvärinen will focus on the highly endangered white rhino and investigate how they influence vegetation structure and soil carbon storage in Hluhluwe-iMfolozi Park in South Africa.

Large mammals for a better climate