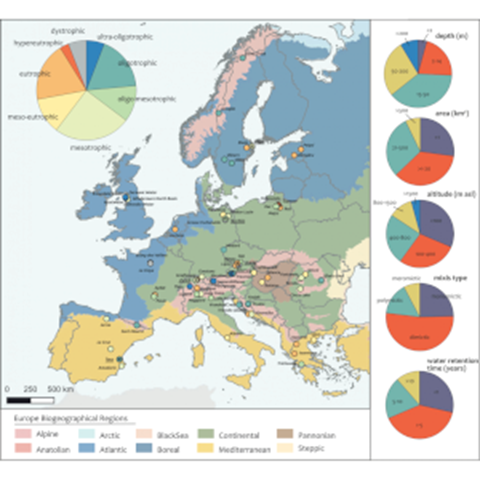 Map illustrating the geographical distribution of sampling sites in Europe. Scroll down for a high resolution version.

Have you ever wondered about the invisible bacteria, archaea, viruses and protozoa hiding in our lakes? Each drop of water contains millions of unicellular organisms that cannot be seen with the naked eye, and in order to map and describe the diversity and function of these organisms, we need to use new methods based on their genomic information.

In the project called "PELAGICS" (Pan-European Lake Sampling - Microbial Eco-genomics), an international group of researchers use new genetic methods to map freshwater microbial diversity on a European scale. The most recent country visited by the PELAGICS sampling team was Sweden, where researchers collected samples from Lakes Mälaren, Erken, Vänern, Vättern and Torneträsk.

For the Swedish part of PELAGICS, Stefan Bertilsson and Matthias Hoetzinger from the Department of Aquatic Sciences and Assessment (SLU) and Silke Langenheder from Uppsala University are participating. The project is led by Michaela Salcher and Rohit Ghai, both from the Czech Republic.

By establishing a collaboration with Abisko Scientific Research Station and Erken Laboratory (both parts of SITES, see below), as well as county administrative boards and the tourism industry, sampling efforts have been organized efficiently and safely and a broader collaboration formed.

In total, 70 large lakes, located in 16 European countries, will be sampled for both bacteria and protozoa. The samples will be used to isolate cultures of bacteria and protozoa, that will be analysed using cultivation methods, and, furthermore, sequencing of the total microorganism genome (metagenomics) will be done.

The project will produce a large amount of sequencing data (20 Tb) in the coming months, and researchers hope that the data will help answer several challenging questions, such as, which organisms make up the freshwater microflora and their distribution in Europe. The researchers also hope to answer more general questions concerning species formation of microorganisms and local evolutionary adaptations. 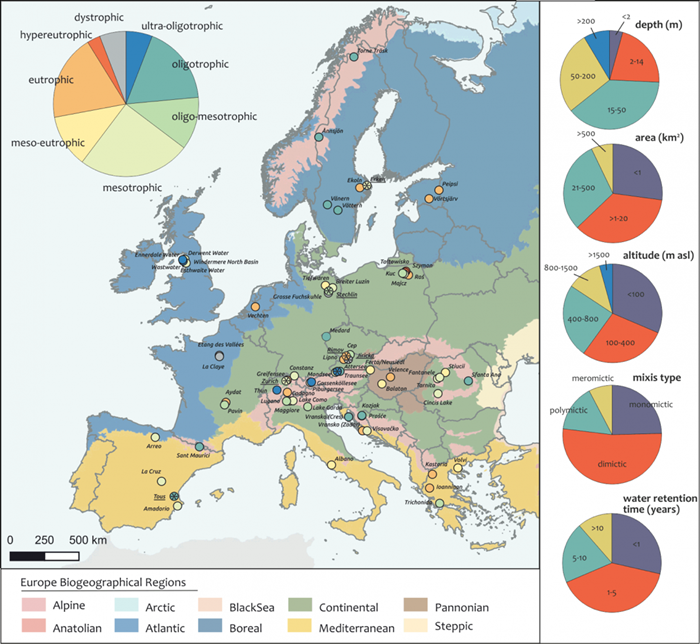 Map illustrating the geographical distribution of sampling sites in Europe. Distribution between different lake types and the characteristics of the lakes is shown as a pie chart.

SITES (Swedish Infrastructure for Ecosystem Science) is a national research infrastructure for terrestrial and limnological field research open to all scientists. SLU is main coordinator for SITES and SITES secretariat is located at the Department of Aquatic Sciences and Assessment.

The core of SITES is nine field research stations that represent a variety of Swedish climate zones and ecosystems, including agricultural land, forests, wetlands, lakes, streams, and mountains. Five of the stations belongs to SLU.