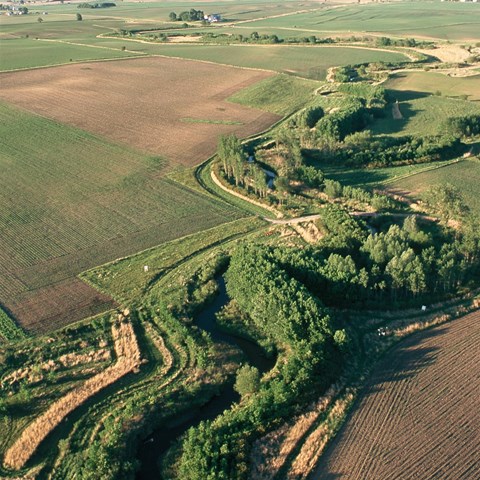 Large-scale deployment of perennial biomass plantations can effectively reduce nitrogen emissions to water and soil loss by wind erosion. This is shown in a spatial modelling study across over 81,000 landscapes in Europe.

A strategic introduction of perennial crops, such as grasses and fast-growing trees in the form of riparian buffers and windbreaks, can co-deliver biomass and environmental benefits. This is shown in a new article, of which Ioannis Dimitriou and Blas Mola-Yudego from the Department of Crop Production Ecology at SLU are two of the authors.

The increasing demand of biomass for energy and biomaterials, necessary for meeting our climate objectives, risks increasing the pressure on land and thus cause further environmental impacts. Humans already manage about half of the Earth’s land area productively, causing environmental impacts such as eutrophication, soil erosion, soil carbon losses, and impacts on biodiversity.

The researchers have previously shown that there is a substantial potential for using so called multifunctional biomass production systems in Europe. By implementing these on a large scale, we can mitigate many of the impacts we have caused by large-scale agriculture in EU and maintain or increase the overall biomass productivity at the landscape scale. In the recent article, published in Communications Earth & Environment, they exemplify how this can be done and quantify the effects.

According to the researchers’ model, riparian buffers are primarily relevant in northwestern and central Europe, while windbreaks are generally relevant in coastal areas and other areas subject to recurring strong winds.

The model then quantifies how large areas within 81,000 individual landscapes need to be covered by the respective production systems to result in desired impact mitigation, under different scenarios with different incentives for implementation. Finally, the model estimates the resulting biomass production and quantifies environmental co-benefits, that is, mitigation of other impacts than the intended: increased soil carbon, reduced soil erosion, and avoided flooding events.

A press release about the article at the Mid Sweden University web.

The article Strategic deployment of riparian buffers and windbreaks in Europe can co-deliver biomass and environmental benefits in Communications Earth & Environment.