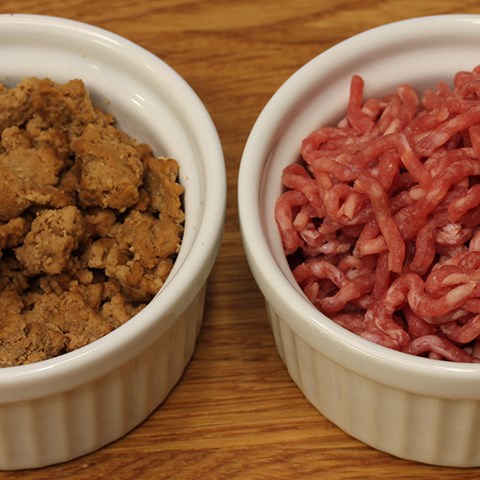 One way to make a meal more environmentally friendly is by replacing some meat (right) with fungal protein (left). Photo: Tomas Linder

If twenty percent of all the beef we eat is replaced by alternative protein sources, the environmental impact of meat consumption would decrease substantially. This according to new research from the Potsdam Institute for Climate Impact Research in collaboration with SLU, which has been published in the journal Nature. The researchers used a complicated computer model to estimate the future effects of replacing beef with protein that has been derived from fungal mycelium cultivated on sugar.

"It turns out that you don't have to stop eating beef completely in order to reach notable effect already by year 2050. That's good news since a radical change in our eating habits may be hard to achieve within the same timespan," says SLU-researcher Tomas Linder, who provided expertise on the nutritional needs of microorganisms as part of the research project.

Food production is responsible for a significant portion of global greenhouse gas emissions. Our consumption of animal protein in the form meat, dairy products and eggs is especially problematic since we need to feed the animals more protein than we get out of them. It is generally estimated that only five percent of all the protein a cow eats from birth to slaughter ends up as meat. Therefore large areas of land must be set aside in order to make up for this "protein leakage". This in turn will lead to greenhouse gas emissions, increased competition for freshwater resources and destruction of natural ecosystems in order to convert them into cropland.

Reducing meat consumption, vegetarianism and veganism are obvious solutions to this problem – as long as a large enough portion of the human population are willing to change their eating habits. However, time is of the essence since we are already beginning to see the effects of a hotter climate. The critical question is whether such change in global animal protein consumption can be achieved within coming decades.

During the last ten to twenty years there has therefore been increased interest for so-called "alternative" protein sources, with the hope that many foodstuffs that are based on animal protein can be replaced with more sustainable alternatives. Fungal protein (or mycoprotein) is one such alternative, which is derived from fungal mycelia that are cultivated inside large bioreactors using sugar. One big advantage that fungal protein has against animal protein is that the fungal mycelium can make its own protein directly from sugar and inorganic nitrogen compounds such as ammonia or nitrate. This means that you do not have to feed the fungus with protein and therefore you also avoid the "protein leakage" effect that comes with meat production. Fungal protein first became commercially available in the United Kingdom during the mid-1980s and today it is an established food product also in Swedish grocery stores.

The new study in the prestigious journal Nature demonstrates that it would be enough to replace a modest 20 percent of the beef we eat today with fungal protein to measurably reduce the expected environmental impact of beef consumption for the next 30 years. The study by researchers at the Potsdam Institute for Climate Impact Research, lead by Florian Humpenöder, was carried out in collaboration with researcher Tomas Linder from SLU.

Tomas Linder is encouraged by the results of the study since they are based on an already established food product and since it will require a less radical change in food consumption patterns, which may be more palatable to people who are otherwise reluctant to completely stop eating beef.

"I am already applying the results literally in my own cooking," says Tomas Linder. "From now on, I only use half as much beef mince when I make a pasta sauce or a chili – I have replaced the rest with fungal protein. It also works to replace at least one third of the beef mince with fungal protein when making meatballs or burger patties without losing taste or mouthfeel. Just thaw the fungal protein, chop it finely, mix it with the other ingredients and start frying!"

The fungal mycelium that produces the protein is cultivated using sugar and therefore still requires arable land. But Tomas Linder thinks that it would be entirely possible to cultivate the fungal mycelium using other materials, which could revolutionize the way we produce food.

"If we grew the fungal mycelium using acetic acid instead of sugar, there would no longer be a requirement for arable land. The reason is that acetic acid can be chemically synthesized directly from carbon dioxide. In such a scenario, food production essentially becomes independent of the availability of arable land. In addition, the climate no longer matters. One could easily produce fungal protein in a desert, in polar regions, under ground or even in space!"

Tomas and the other authors of the study are now planning to look closer at some of these more futuristic scenarios to see what consequences they might have on the future environmental impact.

Fungal protein can be produced in many ways and the fungal mycelium can be "fed" different raw materials in order to grow. At present, sugar from agricultural crops are used together with supplements such as minerals and vitamins, and egg white is often added. The production of a cultivation substrate that is entirely decoupled from agricultural products will of course require energy, which is something that must be considered as part of sustainability assessments.

One way to make a meal more environmentally friendly is by replacing some meat (right) with fungal protein (left). Photo: Tomas Linder