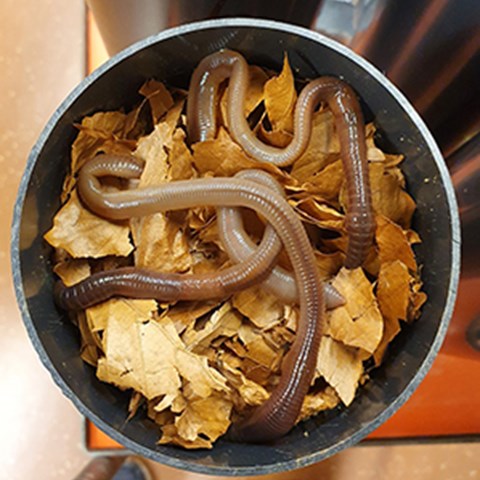 The earthworm Lumbricus terrestris burrows deep down in soils and swallows microplastics unintentionally, contributing to the redistribution of microplastics in the soil and thus affect the way organisms and crops are exposed to plastics. Photo: Wiebke Mareile Heinze, SLU.

Microplastics released from human activity are found in many different natural environments, including agricultural soils. Although they might be harmful to crops and soil organisms, how they are redistributed in soils is poorly understood. A new study shows that microplastics are mobilized by earthworms in agricultural soils, raising questions regarding their further redistribution and impact.

Micro- and nanoplastics are increasingly perceived as an environmental threat due to their high persistence and potential adverse effects on organisms and crops. They can be present in various shapes, sizes (but always below 5 mm) and with different chemical compositions and additives.

Initial studies have confirmed microplastic presence in various different environments ranging from the arctic sea to remote islands and mountain ranges. They have also been found in agricultural soils, which they enter through various pathways such as agricultural management practices – for instance, by the use of sewage sludge or compost. However, their fate after emission has remained poorly understood.

-Agricultural soils are the base of our food production, and therefore it is important to understand both the potential impacts of small plastics in the soil and their distribution, says Wiebke Mareile Heinze, PhD student in soil chemistry at the department of soil and environment, and the study’s lead author.

Enrichment of microplastics in worm burrows

The transport of microplastics may affect their distribution in soil and thereby the levels to which crops and soil organisms are exposed. Wiebke Mareile Heinze and her research team discovered that earthworms ingested nanoplastics (plastics below 1 mm) together with soil, which subsequently spread into the earthworm burrows.

-In our study, we were able to show that nanoplastics are indeed transported deeper down in the soil through the burrowing activity of earthworms, in our case the deep-burrowing species Lumbricus terrestris. Although we did not see negative impacts on the earthworms themselves, such enrichment of plastics in the burrow walls may result in local hotspots of plastics. This might have consequences for earthworms revisiting their burrows or to other organisms using their burrows as habitat.

More knowledge is needed in order to understand the implications of organisms and crops being exposed to microplastics. The transport of microplastics will also determine whether these small plastics are transported to other ecosystems like rivers or marine environments. Therefore, it is very important to continue studying the distribution and mobility of microplastics in soils, according to Wiebke Mareile Heinze.

Microplastics may be redistributed even deeper in soils

-As the soil in our laboratory experiment were limited in depth, we are anticipating that microplastics may be transported even further down in the field, outside of the lab. Therefore, our future investigations are focusing on quantifying microplastic distribution in soils in order to improve our understanding of limiting or contributing factors to microplastic transport in agricultural soils, says Wiebke Mareile Heinze.

Wiebke Mareile Heinze
Doctoral Student in Soil Chemistry at the Department of Soil and Environment
+4618673148, +46730710608
wiebkemareile.heinze@slu.se