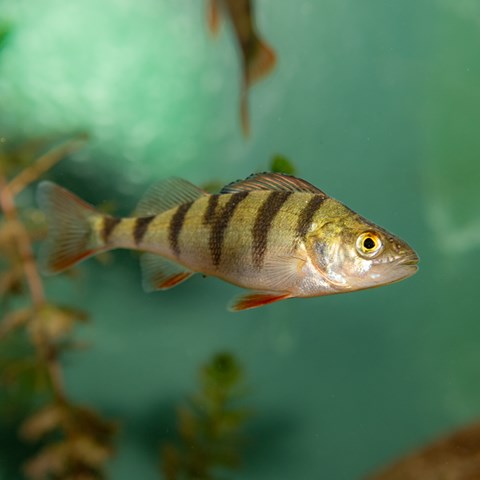 Female perch living in warmer water invest in early reproduction. They mature when they are smaller compared to perch living in natural water temperatures. This is shown by a study from researchers at Swedish University of Agricultural Sciences, recently published in Ecosphere. The fact that the fish are smaller when they become mature can negatively affect fish communities since small females lay fewer eggs and the offspring may also be in poorer condition.

“The fact that female fish become reproductively mature at a smaller size can have big impacts on fish populations as growth is reduced upon maturation, which can result in a reduced maximum size and fewer offspring. On the other hand, a head start in reproduction increases the chance to reproduce at least once. That can be important as the ocean continues to heat up, which can lead to higher fish mortality” says Jingyao Niu, lead author of the article and PhD student at the Department of Aquatic Resources at SLU.

The study is based on analyses of data on Eurasian perch (Perca fluviatilis) gathered over several decades. The researchers compared maturation across body sizes and age, and how this has changed over time, in female perch living in normal water temperatures in the Baltic Sea archipelago, to in female perch living in an artificially heated coastal bay; the so-called Biotestsjön which is heated up by warm-water effluent form the Forsmark nuclear power plant in Sweden.

This set-up of two environmentally similar areas but with a 5-8 degrees difference in temperature allowed the researchers to study potential effects of future climate change at a full ecosystem scale.

“-We saw, for example, that the 2-year-old perch that lived outside Biotestsjön had a 50 percent chance of reaching spawning maturity when they were 18 cm, while the females in the lake already had it when they were 16.5 cm, says Jingyao Niu.

The effect of the warming varies over time

The study not only shows that warming affects fish maturation, it also shows – somewhat more surprisingly – that the effect of the warming varies over time. This may indicate that the warming has already affected the evolution of the perch and led to genetic adaptations.

“Our study shows that warming alone can affect the maturation of fish, which is important for how fish populations are affected by other factors such as overfishing or eutrophication” says Jingyao Niu.

“If the warming leads to a decrease in the number of large spawning female perch, then both ecosystems and fish catches are at risk. It is especially worrisome if smaller maturation size would be caused by evolutionary change induced by warming as it then may be difficult to reverse”, says Jingyao Niu, who together with her collaborators, are now taking the next step, investigating how warming affects fish genomes and how such changes can impact their food webs.

The article ”Decades of warming alters maturation and reproductive investment in fish”, is published open access in Ecosphere.