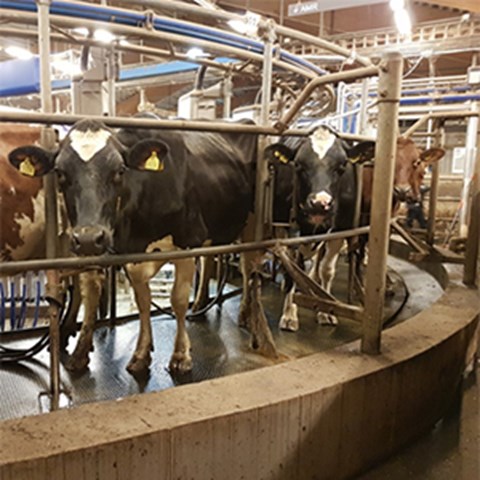 The goal with this project was to find a number of strategies to optimize voluntary cow traffic in herds with automatic milking with AMR.

Automatic milking has been available on commercial farms for almost 20 years. So far, it has mainly concerned milking stations where one cow are being milked at a time, often called automatic milking systems (AMS). Recently, automation has taken another step towards larger dairy farms. At Lövsta Research Center, an automatic milking rotary (AMRTM) is used to milk most of the cows in the herd. The rotary is developed by DeLaval and has 24 milking stalls, two robot arms that clean the teats, two robot arms for teat cup attachment and finally, a robot arm for spraying the teats.

During the spring of 2018, various strategies are investigated to optimize voluntary traffic in AMR, ie when the cows voluntarily go to this automatic milking system. Several aspects are studied in the project, such as the effects of flooring material in the gathering pen, access to concentrates during the milking, various numbers of milking per day, and various strategies for handling animals that need extra supervision.

A large part of the study concerns getting the animals to move between the resting area with cubicles and the eating area's feed bunk and concentrate feeders. It is in this voluntary traffic, that special selection gates guide the animals to milking when it is time. For this reason, we also study the importance of the roughage and concentrate availability on the cow traffic.

The goal is to find a number of strategies to optimize voluntary cow traffic in herds with automatic milking with AMR. Each barn solution is unique and may be optimized in specific ways. With the help of the studies at Lövsta, we hope to find more strategies in how to optimize cow traffic in dairy barns with AMR.

Number of cows included in the study: More than 120