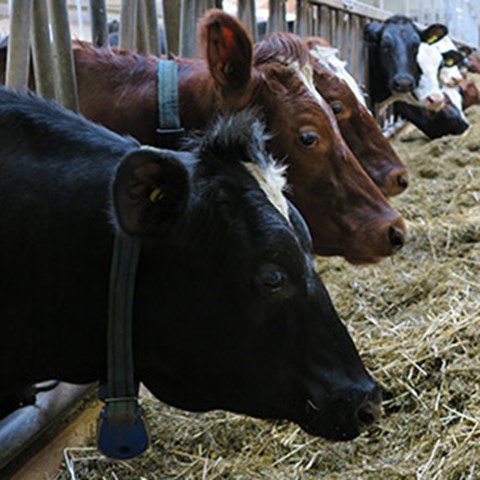 In this project, the effect of red algae on methane production and on the feed digestibility for Swedish dairy cows is tested.

The environmental impact of dairy cows is largely due to methane emissions from their digestion. The cows that are ruminants have a unique ability to convert fiber-rich feed into milk and meat. This is possible thanks to all the microbes found in the cow's largest stomach, the rumen. However, it is just this process where the feed is fermented that leads to methane being produced as the final product. The methane-forming microbes, called methanogens, are the ones responsible for the entire methane formation. In recent decades, a great effort has been invested in finding strategies to reduce the methane emissions of cattle and the livestock sector has been identified as a key player in reducing greenhouse gas emissions.

At the time of application for this study, there were only results from in vitro studies where the addition of the macroalgae Asparagopsis taxiformis in feed gave a significant reduction in methane production, some of the studies showed a reduction of as much as 99%. In 2019, the first study was published, from the USA, where dairy cows were fed Asparagopsis aramata for 3 weeks. Results from this study showed that the algae reduced methane production per kilo of feed by up to 42%. Studies on growing cattle have shown a decrease of about 80%. It is primarily the active substance bromoform in the red algae Asparogopsis that blocks the methane formation of the methane-producing methanogens.

In this FORMAS-funded project, we have during spring 2022 completed a three-month trial that included 30 dairy cows and 20 of them were fed with two different inclusion levels of Asparagopsis taxiformis (AT). We have measured methane production, milk production and feed intake. We have also collected samples to analyze the digestibility of the cows' feed and rumen fluid samples to analyze the effect on microbial community in the rumen. At the same time, we want to find out if, and if so in what form, bromofrom and / or bromine end up in milk, urine or manure. Before the start of the project, we were not sufficiently aware of the high iodine content that the algae can contain, but the iodine content became decisive when we set the inclusion levels, which ended up at 0%, 0.15% and 0.30% AT of organic matter in the cows' diet. In May 2022, we received additional funding from Olof Claesson's fund to analyze the iodine content of milk samples. Results from the dairy cow study will be compiled and planned to be presented in the autumn of 2022.

Media (only in Swedish)

Klimatvänliga kossor testas i Sverige / Climate-friendly cows are being tested in Sweden – P4 May 2022, 0:44:03 into the program (without music)

The project runs between 2020 - 2022 and is financed by the Swedish research council Formas.