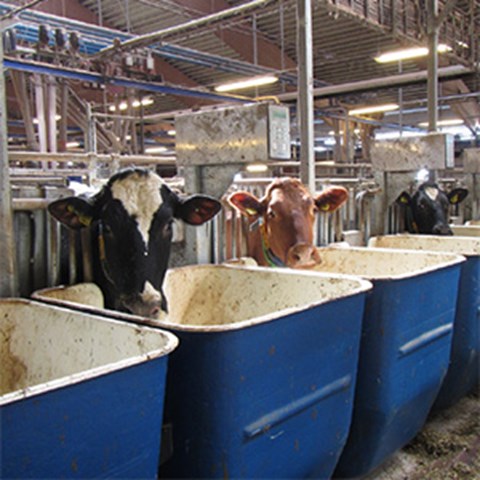 The purpose of the project is to investigate whether cows who have the capacity to consume large amounts of roughage have different microflora in the rumen than low-capacity cows, and if the composition of the microorganisms and methane formation is associated with the passage rate.

Methane production from cows is due to several factors where feed intake has a clear influence. Several studies show that the individual variation between cows is large, regardless of feed intake. Our previous studies clearly show that the individual difference in methane production is greater than the effect of feed itself. This result indicates that it may be possible to breed more environmentally friendly cows. However, it is important to not breed on cows with low digestibility of feed, leading to lower milk production. In order to identify cows that are more environmentally friendly, one should therefore focus on cows that are more effective in producing milk per kilogram of feed and from there study individual differences in methane production, microbial composition, passage rate and individual genetics. Previous research has shown that the variation in roughage consumption is high between individuals as well as the variation in methane production. The ideal is to have a cow that can mainly feed on a large proportion of roughage without giving rise to greater methane emissions than when feeding more grain based diets. We think this is possible by combining modern technology and knowledge in microbiology, genetics and nutrition.

Our hypothesis is that individual differences in methane production can be explained by differences in passage rate and microbial composition, which are also linked. We also believe that the microbial composition in the rumen is different for cows who are able to convert and use large amounts of roughage and that there is a variation in the amount of methane produced in relation to milk production among these cows. We believe that increased knowledge of the rumen can be used to combine high efficiency with lowest possible environmental impact.

In this project we use 4 different sub-studies; Methane measurement of 50 dairy cows over one lactation. Analysis of passage rate of feed in 30 of the cows. Analysis of the microbial composition in the rumen, as well as a detailed culture study on specific methane producing microbes. Link between milk spectra and methane production.