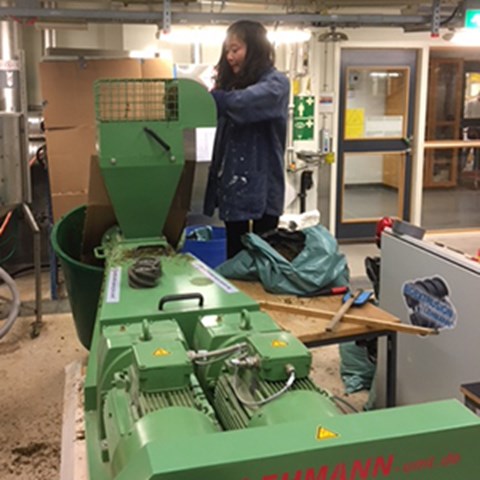 The aim of the project is to investigate how much extensive mechanical processing of silage can increase the forage intake in dairy cows and hereby reduce the requirement for concentrates.

Grass/clover leys are in many areas capable of producing considerably higher dry matter yields than are grain crops. This also implies that the leys can conserve more solar energy in their biomass than grains and other annual crops. In spite of that the milk production often relies heavily on grain based concentrates in such areas. The main reason is that high yielding dairy cows are unable to eat enough of forage to cover their energy requirement. The intake is limited by the retention of feed particles within the rumen, until rumination and microbial degradation has reduced the size enough to allow for passage out of the rumen. In experiments with sheep, mechanical particle size reduction has resulted in improved energy supply because of increased intake.

Extensive particle size reduction of haycrops has previously been done by energy demanding pelleting processes. This project will use an extruder technology, intended for plant material in the biogas sector. It has been shown to reduce the particle size of precision chopped grass considerably and to give a porous structure. The effect on degradation rate in the rumen will be investigated by in vitro technique as well as in feeding trials with dairy cows, where also intake potential and milk production will be measured. To assess the total potential for utilising energy from the ley in a future system, the biogas production from the manure will also be monitored.