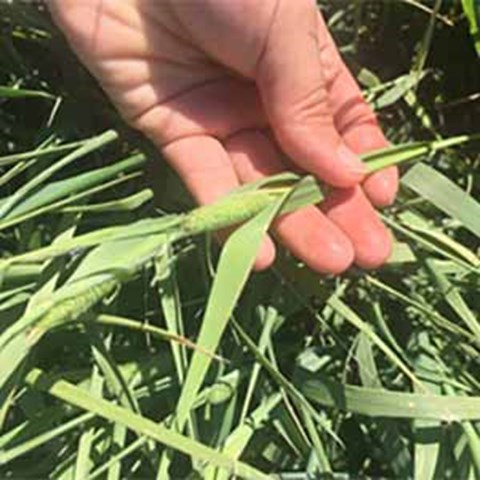 The project investigates the biological conditions for separating a ley crop into two vertical strata fractions with different nutritional quality at mowing.

Leys for dairy cows are commonly cut at multiple occasions to obtain the best nutritional quality. This implies large harvest costs, especially in areas with small, scattered fields of irregular shape, where a ley crop otherwise is the most economically competitive option. An increased number of cuts may also result in a lowered total annual harvest, because the potential of the primary growth is not fully utilized. There would be large benefits for Swedish ley based farming if the number of cuts could be reduced, while still obtaining a highly digestible forage for dairy cows. In addition, there are other animal categories, like dry cows and horses, where it is desirable with a forage of lower digestibility. One possibility for achieving this would be to divide the ley crop at mowing according to vertical strata, with a highly digestible, energy dense fraction for dairy cows and a fraction with lower digestibility for other animal categories.

There are a few studies done internationally of vertical fraction in leys, and the few studies that have been published were either performed with species not grown in Sweden or were solely studying pastures. We will in this pilot project investigate the biological conditions for capitalizing on such a fractionation in leys with pure stands of timothy grass and meadow fescue, respectively. They are the most important ley grasses in Sweden with differing physiological development that causes differences in their proportions of stem and leaves. We will monitor yield and the development of nutritional quality in different strata by analyzing in vitro digestibility, crude protein and fiber (NDF).