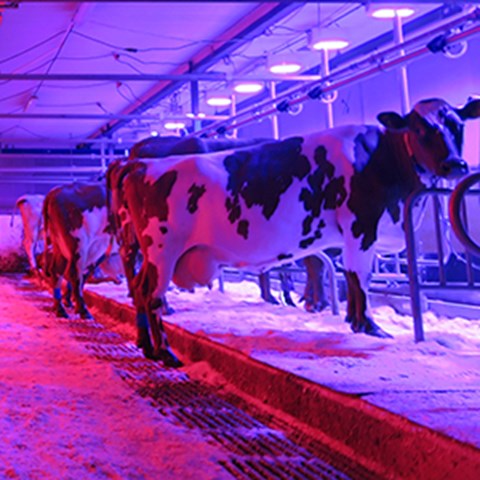 The aim of the project is to study effects of LED-light on milk production and activity in dairy cows.

It is well known that light affects milk production in dairy cows and that the daily milk yield increases when the natural day is prolonged by artificial illumination. However, the effect is less pronounced if the lights are on 24 h per day. The reason for this is that the brain does not respond to the increased light if it there is no variation in the light. However, very little is known about responses to different types of illumination and illumination technology is developing rapidly. One new possibility is to use LED light for animals. LED uses less energy and do not need to be replaced as often as other light sourced that are commonly used in dairy barns.

We have worked with time budgets for dairy cows for a long time and have also done studies on how cow activity is affected by different light programmes. We now have a new research project on LED light to dairy cows. The aim of the project is to study effects of LED-light on milk production and activity in dairy cows. The main hypotheses are that LED light allows maintained cow activity and milk production with less energy used for illumination, and that LED-light makes it possible to apply a dark period during the natural night without decreased milk yield. Two experiments have been performed to identify suitable wavelength and light intensity day and night. Activity, milk yield and hormones that are affected by light and that regulate milk production was examined. The results from the two experiments will be validated on 6-10 commercial farms. The project group includes scientists at SLU, in Denmark and Norway, the company Heliospectra AB and Arla Foods Amba. The expected output of the project is a better understanding of circadian rhythm in cows and recommendations for LED-light in dairy barn for lowered energy use at maintained or higher activity and milk production.

The project is funded by the Swedish Farmers' Foundation and will run 2018-2020.