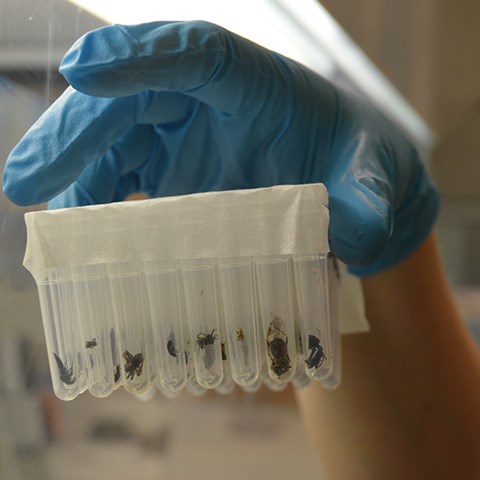 10 000 insects and spiders. What have they eaten? Photo: Anna Lundmark

With molecular methods researchers can discover ecological relationships that they have not been able to study before. It may concern which prey species predatory insects may eat or which kind of flowers that pollinators visit. At the Ecology Centre there is now equipment for analyzing DNA on a much larger scale than before. This enables new exciting projects. And all researchers are welcome to contact the lab if they are interested in using it.

In a freezer at Ecology Centre 10,000 insects and spiders are waiting for analysis. DNA from the prey in their stomachs will reveal what they have been eating. The insects come from traps in fields with oilseed rape or ley at 24 locations in Skåne. This large project would have been impossible to accomplish in Ecology Center's DNA lab when fewer samples per day could be analyzed. Now, thanks to the new equipment, 400 samples can be handled daily (look in the facts box if you are curious about the new devices).

Or it's not really true that there are 10,000 samples wait in the freezer because the lab assistant Tytti Vanhala has already been their many times to fetch test tubes. Now she is in the lab preparing a new bunch for analysis.

Between handling each sample, Tytti cleans the tweezers by dipping them into ethanol and then sticking them into a burner. It is important to ensure that the wrong DNA does not end up in the wrong test tube.

“Contamination is my biggest horror. It would destroy the entire study”, says Kirsten Miller, postdoctoral researcher at the department of ecology and responsible for the project, which aim to explore the ecological interaction between predators and crops in the farming landscape.

The project will also examine how insects move between oilseed rape fields and ley fields when they are adjacent to each other. The project will provide new knowledge about how diversity in the landscape affects biological control, that is, natural enemies of insect pests.

When Tytti has prepared the samples, Kirsten will analyze them in the PCR to amplify the DNA from the prey. The species can then be determined with help of a DNA reference database, “Many insect species in northern Europe are included in the database, much thanks to the Finns actually. In the tropics where I have also worked, it's another matter. There you often have to settle a higher taxonomic level and call them, for example, beetle species 1, beetle species 2 and so forth”, says Kirsten Miller.

The alternative to DNA analysis is to study the insects and see what they capture. Imagine a study where SLU send out people to observe 10,000 insects and spiders in the field! It would take a lot of time. If you set up a controlled experiment instead, the choice of prey is always limited from the beginning. Thanks to molecular methods, the organisms can surprise the ecologists. Several new discoveries have been made in recent years.

One study, for example, showed that pollinators had visited more than twice as many plant species than previously observed by researchers (André Pornon, Scientific reports). Another study from, among others, Tomas Roslin, professor at the ecology department, revealed that dragonflies had tens of different insect groups on the menu – and actually used the same prey as bats and birds do. It's completely new knowledge because it's very hard to see when a dragonfly catches a prey.

Could be used in many SLU-projects

Tomas Roslin and Kirsten Miller want their fellow ecologists to discover molecular methods. And one effort in that direction is a course that Kirsten gave specifically aimed at PhD students and researchers with a limited knowledge of molecular techniques.

"I think molecular techniques can be used to complement many ongoing projects at the department and SLU. Sometimes people are more excited about a new technique than the questions you can answer, this is not what I want to encourage. But I do recommend that people think about how these techniques can provide useful insights into their research, "says Kirsten Miller.

All SLU researchers can utilize the DNA lab, if there is free capacity and they pay the bench fee. 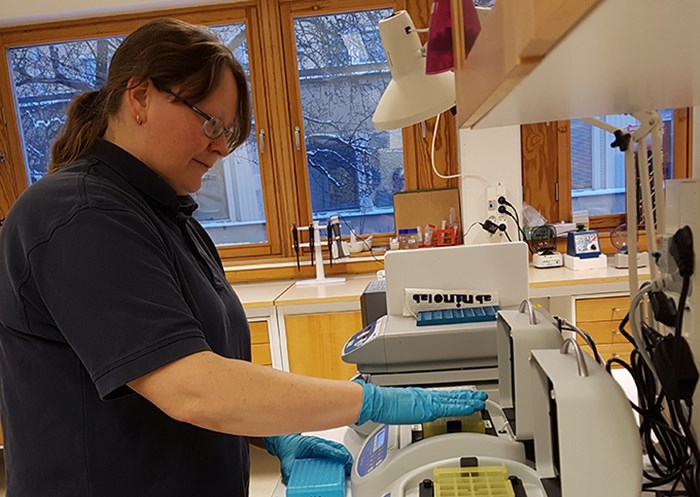 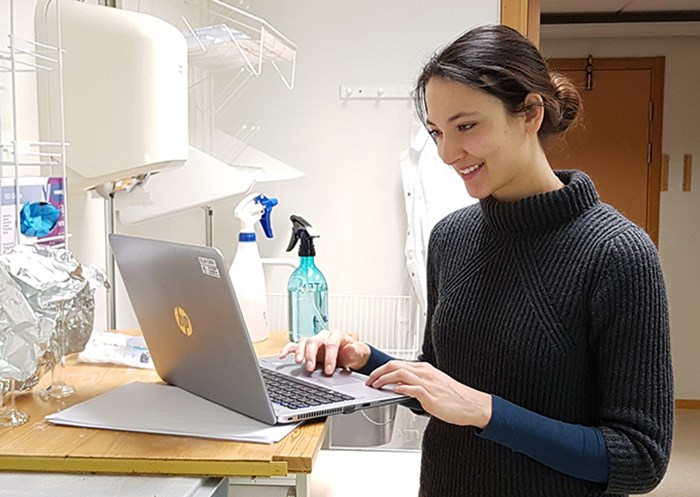 Many of the pieces of equipment will enable the extraction of ecological samples in a 96-well plate format, thus speeding up the extraction process and enabling a much higher output than before.