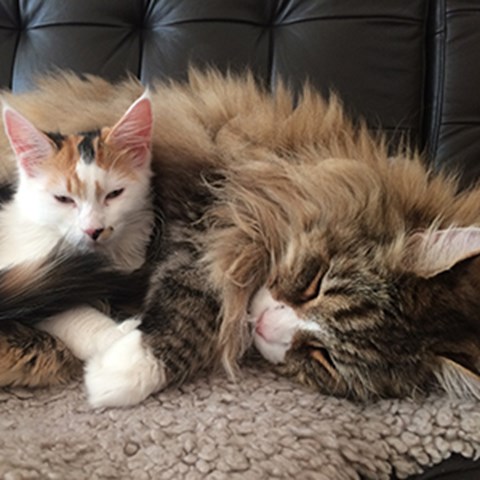 Hip dysplasia can be painful for the cat but it can be difficult to know the degree of pain the cats feel when affected. One sign is that they avoid jumping up on tables. Photo: Åsa Ohlsson

Millions of cats in the world likely suffer from hip dysplasia, but this cat health problem has rarely been studied. In a newly published study with a focus on the ‘gentle giant’ Maine Coon breed, SLU researchers conclude that the condition is heritable and is more common in large cats. The study also showed that the Swedish health program has been effective in reducing the incidence of hip dysplasia in the breed through selective breeding. The finding that larger cats are more likely to have hip dysplasia suggests breeding for the large body type carries with it the additional risk of hip dysplasia.

Hip dysplasia is well known and studied in dogs. But this new study, now published in Scientific Reports, is the largest study based on data from cats, and the first to examine heritability of the disease.

About 20 years ago, the health program for Maine Coon cats started in Sweden. One reason was early indications that the breed could have problems with hip dysplasia. And it turned out to be the case; hip dysplasia was relatively common, with roughly one third of cats affected. The initiative came from Sweden but today cats from all over the world are included. The program itself is unique because it focusses on cats - other health programs for hip dysplasia are primarily aimed at breeding in dogs.

"We wanted to see if the program was having an effect or if we should change something. It worried me that we still had such a large proportion of cats with hip dysplasia", says Åsa Ohlsson, researcher at the Department for Animal Breeding and Genetics, SLU.

But after 20 years of the breeding program, the numbers of new cats with hip dysplasia being examined was just as high as when the programme started, suggesting that maybe it wasn't working. But when SLU researcher Matt Low examined the statistics based on genetic kinship, he saw that the program was effective. The cats that originated from individuals bred according to the health program's recommendations had lower incidence and severity of the hip dysplasia in subsequent generations. The reasons why this pattern was not obvious from simply looking at the number of cats with hip dysplasia was that many new cats are coming from a background where their parents have not previously been evaluated. In addition, this cat breed has generally been getting larger, which turned out to be an important clue.

"When we first analyzed the data we saw the connection between big cats and hip dysplasia. It was then that we decided to look at genetic correlations between genes for body size and those for hip dysplasia. We found that as the breed increases in size, its hips get worse. This clearly indicates that it is probably not a good idea to promote larger body sizes in its breeding", says Matt Low, researcher at the Department of Ecology, SLU.

Cat breeders around the world have waited eagerly for the results of such a study. The fact that hip dysplasia is heritable and is genetically correlated with body size is likely to be controversial, with large Maine Coon cats awarded at exhibitions because the current breed standard emphasises this large body size. But there is good news in that the incidence of hip dysplasia can be reduced with health programs and selective breeding, both for breeders and the cats themselves.

"No one wants their cats to feel pain. However, it can be difficult to notice. Cats are much better at hiding pain than dogs are. Important signs to watch out for are whether the cat moves less or is more careful in its movements than you might expect. They can also avoid jumping up on a table or kitchen counter, for example, because of the pain in their hips", Says Åsa Ohlsson.

X-ray of a cat with normal hips and a cat with severe hip dysplasia. Photo: SLU

The breed Maine Coon is sometimes called the gentle giant. SLU´s study shows that breeding for larger size is not a good idea since it is linked to hip dysplasia. Photo: Åsa Ohlsson

Hip dysplasia can be painful for the cat but it can be difficult to know the degree of pain the cats feel when affected. One sign is that they avoid jumping up on tables. Photo: Åsa Ohlsson

Hip dysplasia is a hereditary condition that leads to a misalignment of the hip joint. As a result, ball-and-socket joint of the hip begins to wear and breaks down the protective cartilage that normally cushions the joint. This results in painful bone-on-bone movement, which is often painful for the cat and results in arthritis.

The analysis in this study was based on 5038 Maine Coon cats. While there is also data from other breeds within the health program, there is currently not enough to assess the size of the problem. From previous studies it is likely that the general incidence of hip dysplasia is about 10-20 percent for cats, regardless of breed. However, this needs to be studied.