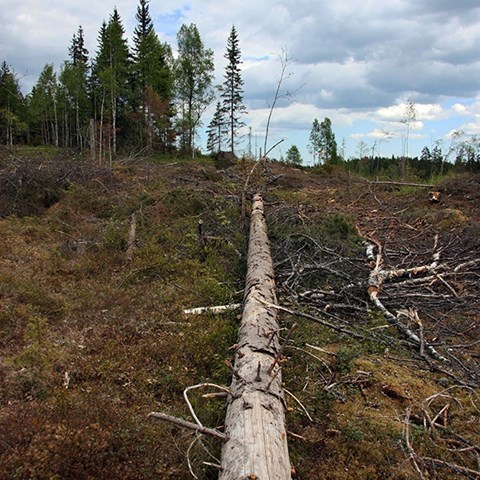 Almost three decades ago, Sweden introduced a more biodiversity-oriented forest policy. A new study shows that important habitats have increased since that time. This applies to dead wood, large living trees and deciduous tree species. However, the amounts of these structural components are still far below those found in old-growth forests. That can explain the lack of any observed improvement in the overall status for red-listed species in Swedish forests. A negative trend was found for understory vegetation cover, which has decreased in all studied forest types.

“Retention forestry has likely increased the amounts of dead wood, large living trees and tree species diversity. The increase was most prominent in production forests in southern Sweden. Despite the changes many species remain threatened, which might be due to slow responsiveness of such species. However the improvement may also be too small to make any major effect on threatened species. The amount of dead wood is, for example, still much lower than what is found under natural unmanaged conditions”, says Julia Kyaschenko, researcher at SLU and lead author of the article recently published in Journal of Environmental Management.

The project is a result of a collaboration between SLU, University of Eastern Finland and the forest company Stora Enso. The development of biodiversity important structural components in Swedish forest was studied from 1983. The focus is on the approximately 30 years that have passed since the parliament declared equal importance of the production and environmental goals in Swedish forestry. The researchers have used data from the Swedish National Forest Inventory to assess the development of dead wood, large living trees, tree species diversity and understory vegetation in four different forest types: production forest, low-productivity forest, woodland key habitats, and protected areas.

In the production forests, especially in southern Sweden, the amounts of dead wood and large living trees increased the most. The positive trends coincide in time with the introduction of retention forestry, although other factors such as more storms, insect outbreaks and fires could also have contributed to the increase.

Northern Sweden, had the smallest increase, suggesting that the effects of a more biodiversity-oriented forest management there are counteracted by logging lands previously little affected forestry.

The amount of dead wood and large living trees was low in low-productivity forests. The minor changes observed for this habitat suggests that these forests has not changed significantly during the period covered in the study, which in turn may relate to that they according to the Swedish forest act are exempted for forestry.

Lodgepole pine is the most common non-native tree species in Sweden, and its proportion increased from 1 to 2 percent over the study period. According to the forestry act, it is allowed to plant lodgepole pine in northern Sweden, but certain restrictions apply.

Understory vegetation is declining in all forests

In all forest types, we found a declining cover of the understory vegetation. It is likely that denser, and consequently darker conditions, in both managed and unmanaged forests had a negative effect on understory vegetation. Forestry can be an important factor behind this pattern, but it is not the only explanation, as the same trend of declining cover also were observed in unmanaged forests. This suggests that other factors also are important. A warmer climate and eutrophication from nitrogen deposition may have contributed. In addition, effects from past cessation of cattle grazing and reduced fire frequency may generate long-lasting legacy effects that still contribute to the trend of denser and darker forests.

Many forest species are still threatened, according to the red list. One explanation for this is that the supply of dead wood in all forests - including protected forests - is far below that found in old-growth forests. The amount of dead wood is lower than what is needed to preserve biodiversity, according to previous assessments by researchers.

“It is important to continue with retention forestry in production forests to ensure further increase in structural components in those forests. Further, our results indicate a need for restoration measures also in woodland key habitats and protected areas. Such measures can include artificial creation of dead wood and gaps, or prescribed burning, to mimic a natural disturbance regime” says Julia Kyaschenko.

“The results suggest that the environmental concern applied in forestry makes a difference, but also demonstrate that there is much work to be done to improve conditions for biodiversity. It is also interesting that the trends are so different among regions. These differences, and the notion that the starting point to ameliorate the conditions for biodiversity differ greatly among regions is something that we need to acknowledge when we set goals for further nature conservation and restauration efforts”, says Hanna Staland, sustainability specialist at Stora Enso.