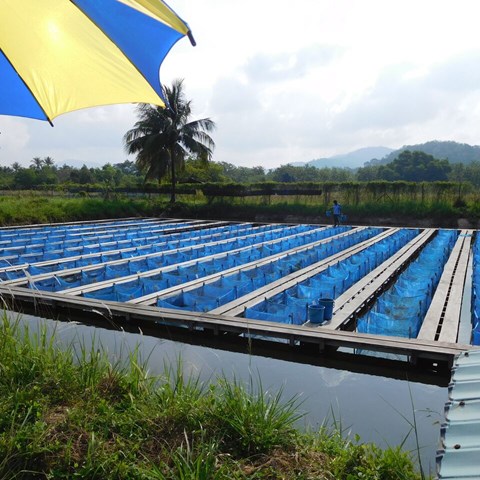 In livestock and aquaculture, there has been a long-standing desire to reduce variability by means of genetic selection. The variability of trait values of a genotype, measured either repeatedly on the same individual, or on multiple individuals belonging to the same family, has been studied as a quantitative trait in its own right. This trait is often referred to as “inherited variability” or “heritable variation in environmental variance”. Animal breeders have successfully improved mean levels of trait values, but have struggled to understand, let alone reduce, the variability of trait values among individuals. A primary obstacle has been the difficulty to estimate heritabilities and breeding values for variability. In domestic Nile tilapia, for example, size differences among individuals are very large but the genetic background of this variability is unknown.

In the traditional quantitative genetic model, the phenotype of an individual is determined by the direct effect of its own genes and an environmental effect. With social interactions, however, the phenotype of an individual may also be affected by genes of its social partners. Such effects are known as Indirect Genetic Effects (IGE). IGE can contribute substantially to heritable variation underlying the trait, and may even reverse the direction of response to selection. In some species, IGE and inherited variability are related via competition.

The observed relationship between social interactions and variability in aquaculture suggests that genetic improvement of social effects may be a promising route to reduce variability. Similar indications come from the field of plant breeding, where breeders have successfully improved uniformity by reducing competition among individuals, which has substantially increased crop yields. Hence, in plants, a clear genetic relationship exists between competition, variability, and yield, while in aquaculture it is known that there are strong phenotypic relationships. At present, however, the genetic relationship between social interactions and variability among individuals is almost entirely unknown in animals, largely due to inability of the current quantitative genetic models of IGE and inherited variability to model such relationships. The lack of quantitative genetic models that connect IGE to inherited variability limits our understanding of the potential of variability to respond to selection, both in nature and agriculture.

In this project, Wageningen University (WU) and SLU cooperate with WorldFish Center in Penang, Malaysia (WorldFish), which provides the necessary data and experimental facilities. At present, WorldFish and WU are already cooperating in another PhD-project, in which data on Nile Tilapia are collected on a large scale, aiming to estimate direct and social genetic effects on growth rate. This project builds on that knowledge, but primarily focuses on relationship between social interactions and variability. The large size differences related to competition for feed, together with the desire to reduce these differences by means of genetic selection, make Nile tilapia an ideal species to study the relationship between social interactions and variability. Therefore, Nile tilapia was also used as a model species in this project.

To integrate social interactions and inherited variability, this project consists of four steps:

The data required in steps 1 are collected as a part of an existing collaboration between WU and WorldFish. This data collection is conducted at the Jitra Research Station of WorldFish, located at Kedah State of Malaysia, using the GIFT (Genetically Improved Farmed Tilapia) strain of WorldFish. This experiment is specifically designed to estimate genetic parameters for social effects, and also allows the estimation of inherited variability because of the strong half-sib structure in the data. Data are collected in two batches, each with 75 sires mated to 150 dams to produce 1800 offspring, that are allocated to 150 groups. Groups have been created by putting net-cages in earthen ponds, which has proven to work well. In addition, for step 1, data on growth rate from 7 generations of the ordinary GIFT breeding program will be used, to allow estimation of genetic parameters for variability based on large numbers of records. In the step 2 & 3 data will be generated via simulations. The data for step 4 will be generated during the PhD project, using experimental facilities of WorldFish. During this experiment, full-sib families of Nile tilpia will be allocated to two treatments – rearing in groups that consist only of full-sibs and rearing in groups consisting of full-sibs and unrelated, unfamiliar individuals. The experiment will be conducted in two batches. Each batch will consist of 30 groups, of which one half will be in treatment 1 and other half in treatment 2. Each group will consist of 50 individuals. Hence experiment is expected to yield 3000 individual observations on body weight and 60 observations on within-group variability of body weight.

Analysis of the real data on Nile tilapia will give an insight in magnitude of genetic variation in variability, and therefore possibilities for improvement of uniformity by means of genetic selection. Theoretical work involving development of model that connects competition and variability will allow integration of two important research areas in quantitative genetics and open the door for future studies. The joint study of IGEs and inherited variability could help us understand observations from animal and plant breeding, and possibly enable utilization of genetic variation that has so far been untapped. In addition, it may bring new insight in mechanisms of canalization or insensitivity of individuals to genetic and environmental changes and broaden our understanding of phenotypic evolution. Therefore, a joint study of IGEs and variability could make a significant contribution to the field of quantitative genetics, and its applications in animal and plant breeding and in evolutionary biology.

Moreover, there is a long-standing desire in livestock and aquaculture genetic improvement to reduce variability among individuals. The research proposed here has the potential to make an important and novel contribution to that goal. This project also aims to improve productivity in Nile Tilapia by reducing competition among individuals. An increase in productivity of Nile Tilapia will be an important contribution to the mission of WorldFish, which is a large non-profit organization focusing on alleviating poverty and hunger by improving fisheries and aquaculture. Compared to traditional directional selection, we expect that improvement of productivity originating from reduction in competition will yield less trade-offs in health and welfare, and may even have animal welfare benefits.

The project is funded by: EGS-ABG