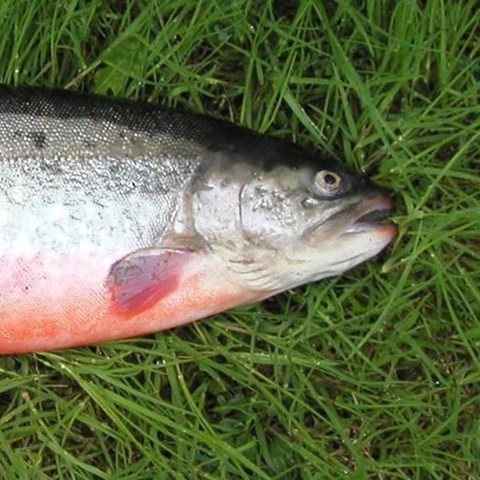 SLU and Aquaculture Center North (VBCN) in Kälarne have been involved in breeding and research on Arctic Char and rainbow trout since the 1980’s. There is a formal agreement about responsibilities and duties I n relation to the breeding program and other research activities in relation these species. VBCN formally owns the breeding populations while the genetic progress is property of SLU

The goal of the activity is to establish and maintain breeding programs for Arctic Char and rainbow trout suited for the Swedish aquaculture environment. We opted for a family based breeding program, with known relationships between all fish. Only in this way can we have genetic progress and control of inbreeding that put our breeding programs on par with those in our neighboring countries.

State of the art in rainbow trout

We have established an advisory board for breeding including breeding specialists from SLU, representation from VBCN and important trout farmers from Sweden. The advisory board has responsibility for the breeding goal and ensures that research interests and industry needs go ‘hand-in-hand’.

In 2016, we established a new breeding generation with the main goal to establish a large broodstock with many families to enable high selection intensity with acceptable inbreeding levels.

At the end of 2017 this generation is about 3800 divided over two ponds. In spring 2018 these fish will be tagged and we will do the first phenotypic selection. Half of the fish will be located off-sit as a back-population for the breeding program. This will also give the opportunity to measure performance of these families in another environment.

In 2018 we will start developing triploidization, maybe in combination with sex reversal to create all female triploid populations for production.

State of the art Arctic Char

The breeding program in Arctic Char has been successful for many years. Arcitc Superior is a known brand of fish and since 2015 we have established an extra generation every other year to better meet the demands for more fry.

In 2017 we established a new breeding generation of 55 families that will be tagged and measured in 2018 and separated in a local broodstock as well as two back-up population off-site.

The 2014 broodstock will come into full fry production in 2018. The breeding goal is currently limited to growth with selection against deformations and early maturity. We will soon start to work more on improving fertility in order to meet the increased Fdemands from farmers.

Following a government decision in 2016 we were tasked to develop production fish that cannot reproduce when they escape for both target species.  This will be achieved by triploidization. To achieve triploid fish we will treat the fertilized eggs with heat and pressure. This will prevent excision of the third polar body and the fish will have three copies of each chromosome instead of the regular two copies.  As a result these fish are sterile and cannot reproduce. This technique needs to be optimized for both species and correct husbandry practices for triploid fish have to be established.

The project is funded by: Swedish Government and Department for Agriculture