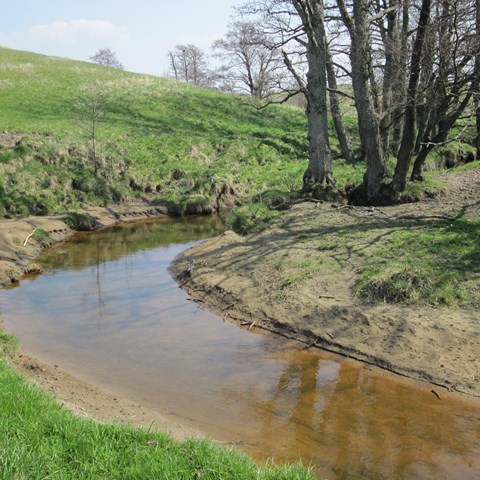 Pesticides play an important role in ensuring good crop yields, but at the same time carry a risk of toxic compounds entering the surrounding environment. Plant protection products that are spread on agricultural land can be carried away with rainwater into watercourses and lakes. On the way they are broken down, often to more harmless substances, but some reach the water recipient and there they can cause damage to plants and animals in aquatic ecosystems and pose a threat to drinking water quality.

Risk of damage has decreased

When pesticides began to be used on a greater scale during the 1950s, the products were applied without any great knowledge of the negative effects that can occur in the environment. Persistent compounds that accumulated in food chains were used, for example DDT. When knowledge increased about the risks of spreading pesticides, stricter rules were introduced on the compounds that could be used. Persistent and bioaccumulating compounds in particular had to be avoided. Levels of substances used in agriculture have decreased in recent decades. The handling and application of these substances has also improved. All this has led to a decrease in the risk of unintentional damage to the environment, particularly the risk of a compound being able to have a long-term impact and to slowly build up concentrations in the environment that are harmful to flora and fauna.

Pesticides found in the aquatic environment

Through the national environmental monitoring programme in Sweden, pesticide status in the environment has been continuously monitored since 2002. Pesticides are analysed in streams in four small catchments and in two slightly larger rivers. The results of these analyses show that small amounts of pesticides are present in all streams and rivers, and that in approximately one in three samples, there is some compound that exceeds the guideline value, which indicates that some organism that live in water can be harmed. However, in most cases these excesses are fairly moderate. Between 10 and 30 compounds are found once or twice a year in concentrations that can pose risks for algae and fauna in rivers and streams.

With the help of an estimated toxicity index, it is possible to compare water quality between different sampling areas and within the same area at different times. A higher index value means a greater risk of effects on aquatic organisms. 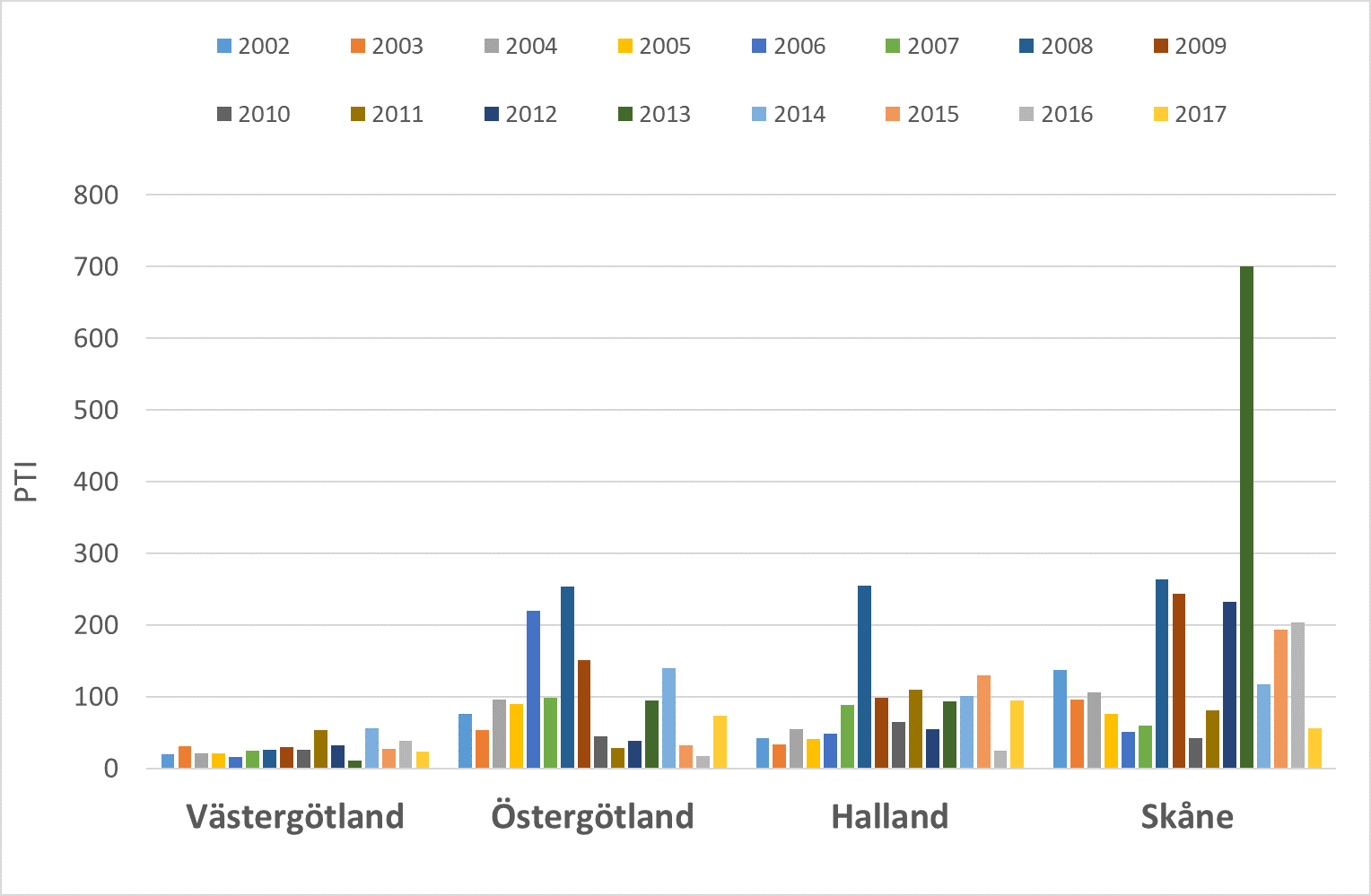 The diagram shows the index values per year for surface water within the four catchments (one per county) where environmental monitoring has been carried out in Sweden since 2002. The changes in the index values show the trend for the cumulative incidence of pesticide residues (per area and year) in relation to the respective guideline values. Compounds with guideline values lower than the detection limit are not included in the calculations.

There is rather large variation in the combined index values for each year and thus it is not possible to see any clear trend in whether they are increasing or increasing over time. However, there are relatively clear differences between monitoring areas. In Västergötland fewer substances are found and there are not as many that exceed guideline values as in the other three areas, which results in a lower toxicity index. Skåne, on the other hand, has a somewhat higher index over the years than the other areas. This is due in part to a warmer climate and a longer growing season, which means a greater need for plant protection measures, and in part to the crops cultivated in Southern Sweden, such as sugar beet, which requires high levels of protection.

Vemmenhögsån in Skåne has the longest time series of plant protection product measurements in surface water in Sweden. Since the beginning of the 1990s concentrations have declined dramatically, despite there being no reduction in pesticide use. This reduction in the measured concentrations is a result of numerous information campaigns in the latter half of the 1990s aimed at the area's farmers concerning good management of plant protection products. 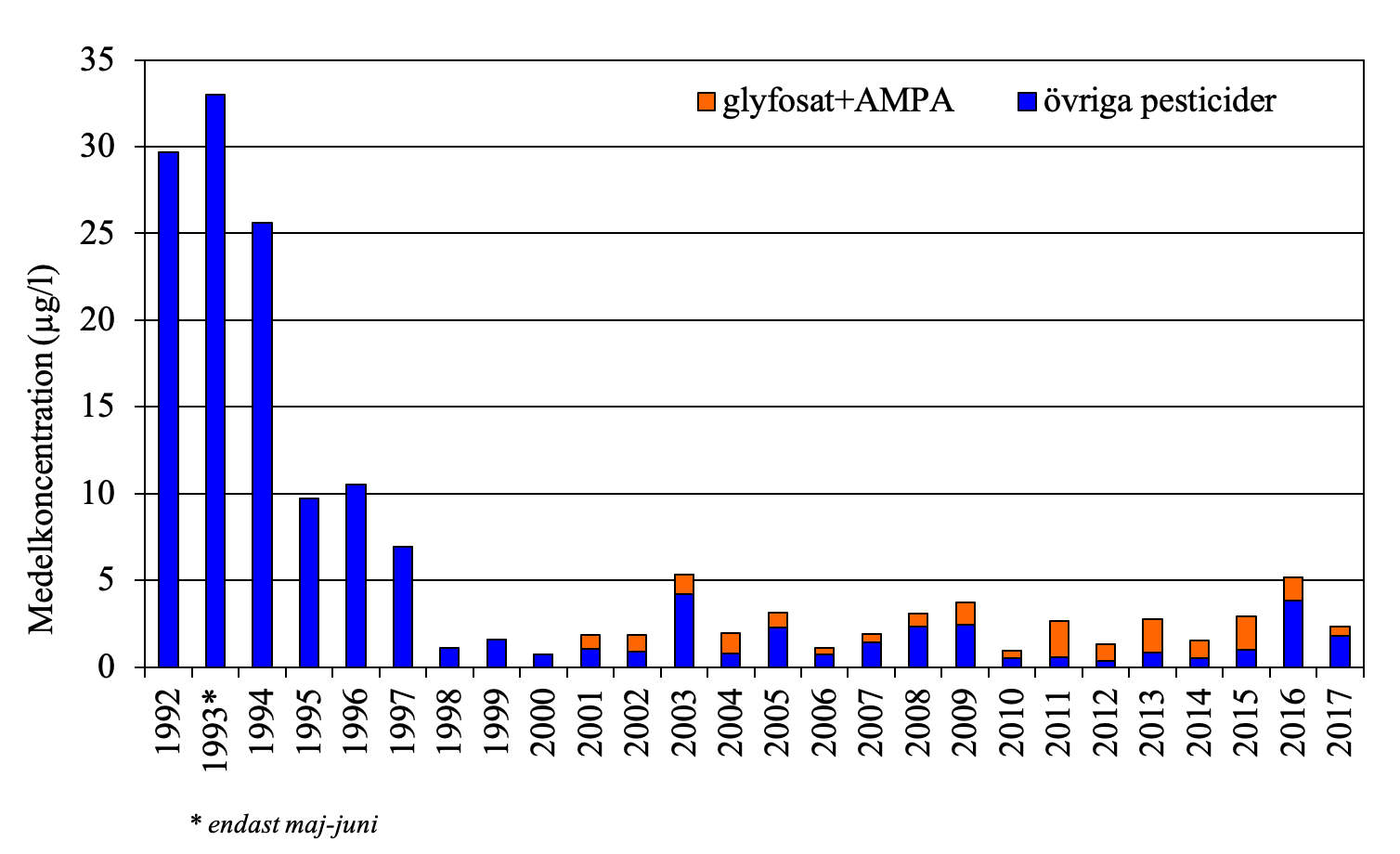 The diagram shows changes in mean concentrations of pesticides in the River Vemmenhög in the period 1992-2011. Glyphosate and its metabolite AMPA showed in read.

The use of persistent pesticide compounds has decreased, but the acute toxicity compounds have been retained and refined. The aim is for these to have a rapid effect and then be broken down before they reach streams and aquatic organisms. This means that the compounds should not be able to have any effect over a longer period, but since they are very toxic in the initial stage, it is critical that they do not reach streams too quickly. There is evidence that heavy rain after spraying can wash out pesticides rapidly to surface waters, with practically catastrophic effects on animal life in these waters.

The efforts to decrease the risk of bioaccumulation have involved avoiding compounds that are fat-soluble and instead prioritising compounds that are very soluble in water. A disadvantage with this is that the new pesticides do not attach as easily to soil particles and are therefore transported relatively quickly through the soil down to the groundwater and out to surface waters, bringing increased risks of acute effects on organisms living in lakes and streams. Compounds that are acutely toxic even at low concentrations are often used to control insect attacks. In environmental monitoring, concentrations of these insecticides are occasionally recorded that exceed the guideline values several hundred-fold. There can then be extensive impacts on water organisms.

Accidents and carelessness are possible causes of harmful effects

Acute effects also arise due to accidents and carelessness, e.g. due to sprayers and other spraying equipment being washed in inappropriate ways or to spraying being carried out too close to streams. It is difficult to assess the frequency of acute toxicity effects arising as a result of inappropriate spraying or accidents. The episodes are very short, but can still have obvious consequences if the compound washed out is toxic to aquatic organisms. With instantaneous sampling, which is the most common method, a water sample is taken at a specific time that gives a snapshot of the levels in the water. There is very little likelihood of successfully taking a sample precisely when the high concentration occurs. With time-integrated sampling, which is used in the national environmental monitoring programme and elsewhere, all peaks are included, but the samples are analysed as collective samples over an entire week, which makes it very difficult to say how high the peak concentrations were.

It is important to be able to determine whether lakes and watercourses are affected by pesticides in order to be able to implement the correct measures, and to ensure that the water has a good ecological status (in accordance with the EU Water Directive). The sharply varying concentrations of pesticides pose a difficulty as regards assessing the risks of damage in water on the basis of a few values. Since the concentration peaks may be short-lasting, it is difficult to ascertain anything about the highest levels. Another difficulty is that as a rule, a number of compounds occur simultaneously in water and this makes it difficult to assess the combined effect on aquatic flora and fauna. Analysis of pesticides is also additional. Investigating aquatic flora and fauna may therefore be a more effective approach, since the communities of species are continuously exposed and therefore reflect the combined effect. The status of aquatic organisms also occupies a central role in Swedish water management and in the EU Water Directive.

Monitoring is being carried out in four small catchment areas (800-1700 hectares), representing four large agricultural regions in Sweden. These areas are referred to as type areas and they are located in Skåne, Halland, Östergötland and Västergötland, and in all of these areas about 90 percent of the land is agricultural. The water in the streams is sampled weekly from May until November and the samples are analysed for around 140 different substances. The farmers in these areas are interviewed about their cropping practices and pesticide use, while groundwater samples and sediment samples are also taken. The environmental monitoring also covers two rivers in Skåne for surface water sample-taking and two locations (one in Skåne and one in Uppland) for rainwater collection, with the one in Skåne also used for air-sampling.