The new carbon-metabolic crops for the future: Our version is to develop crops to produce more and better biomass materials with less environmental impact. We use rice, barley, tobacco and Arabidopsis as model plants to direct carbon flux to different biomass products, such as lipids, starch and dietary fibers. The new carbon-metabolic crops with novel traits have different applications in industries and agriculture.

Low-methane rice: Using transcription factor technology we have successfully generated the world´s first low-methane rice, SUSIBA2 rice (Su et al 2015, Nature 523, 602-606 and Figure 1). SUSIBA2 rice can reduce over 90% of methane emissions from rice paddies and increase yield more than 10%. If the world adopts SUSIBA2 rice in global rice cultivation, it would generate an effect of removing 200 millions of cars from the road and feed additional 700 million people.

WRI1 rice: Overexpression of Arabidopsis transcription factor WRI1 in rice endosperm has led to an oil content increase from ca 1% to 2% in rice seeds. Theoretically this will bring 10 million tonnes of oil annually from global production of one billion tonnes of rice.

In barley, we have found a molecular yin-yang system that directs carbon flux between starch and dietary fibers (Jin et al 2017, Molecular Plant 10, 1556-1570 and Figure 2). Using the yin-yang system, we have achieved five lines of yin-yang barley via screening and crossbreeding. The yin-yang barley has over 25% of dietary fiber content. They are on the field trials under development to new varieties for agricultural production.

We have demonstrated that overexpression of a gene from Agrobacterium in Arabidopsis can allocate more carbon to oil synthesis and less carbon to polysaccharide synthesis (Jin et al 2017, Biotechnology for Biofuels 10, 19). The finding has a potential in increasing oil yield in oil crops. 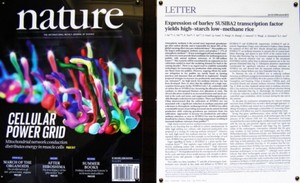 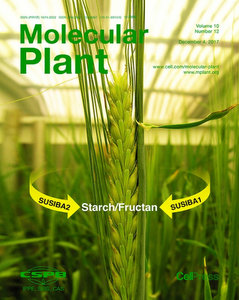