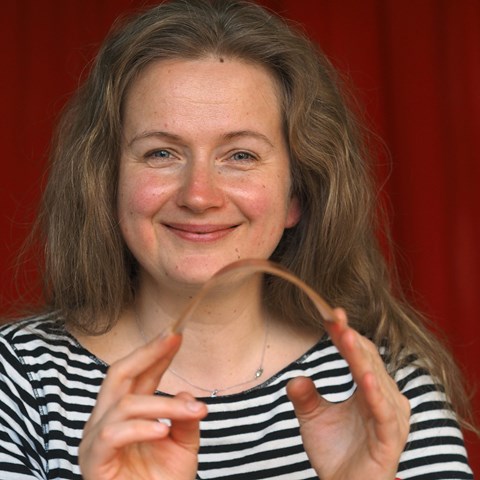 By combining proteins from wheat with starch from a specially designed potato type, innovative bioplastic materials can be produced. In the future, the new green-plastics can potentially be used for packaging, house insulation, car parts, medical textiles and many other products. Her research is showing what is technically possible, the next step is to see how the production can be made cheaper and how the environmental advantages are to be evaluated.

Ramune Kuktaite is a researcher at SLU in Alnarp. When we meet her, Ramune pulls out a rectangular sheet of beige material made of plant proteins from wheat. It is approximately half a centimetre thick, strong and flexible, which she demonstrates by bending the bioplastic material into an arch.

Another rectangular sheet is thin and hard and is made of other types of proteins that originates from potatoes. In the laboratory, there is a selection of plastics in different shapes and colours. Some look like spaghetti, some are like threads in a cobweb, while others look like finished products in the form of plastic packaging trays.

She is driven by the quest for new knowledge and the vision to contribute to a better world by finding environmentally sound alternatives. The thirst for knowledge prompted her to think about factors influencing bread baking quality from a scientific perspective. This led her on to more detailed studies on how different types of wheat proteins contribute to bread quality. And she has continued along this road. The knowledge on protein behaviour in bread can also be used to understand protein behaviour when making bioplastic materials with new properties.

A related research theme that Ramune is involved in is to develop protein-rich foods that could be used as healthy alternatives to meat. The idea is to use locally produced proteins from for example beans, lupines and peas to make new protein-rich foods.

At Kaunas University of Technology in Lithuania, Ramune focused on wheat gluten proteins and bread quality aspects during her Masters degree. She did her practical work at the Department of Plant Breeding at SLU, which is where her strong link with SLU took root. After her Masters project she returned to Sweden and SLU in Alnarp as a doctoral student. Her thesis, presented in December 2004, concerned protein quality aspects in wheat.

After a couple of years in Italy, working for a company that develops gluten-free products, Ramune returned to SLU in 2008 to carry out research on how proteins can be used in developing bio-based plastic materials. This was in line with the vision of TC4F.I In 2010, Ramune became a TC4F research school coordinator. The research school focused on multidisciplinary research activities dealing with forestry- and agricultural resources.

Making bioplastic using starch from potatoes and maize is nothing new. The production method is well known, but it is not known how well suited it is when novel starch materials are used or when starch is used together with proteins.. The use of the newly produced potato starch in combination with wheat proteins in order to make a composite – is an innovation. The result is materials with many different properties and varying colours.

The researchers in Alnarp have taken the combination one step further. They use starch that originates from a genetically modified potato, developed by Mariette Andersson and her colleagues, using the CRISPR genome editing technology, the 'gene scissors'. The result is a potato that differs from the ordinary potato eaten as a vegetable, both in appearance and in the structure of the components.

The protein – gluten – used for the plastic composite is taken from ordinary wheat flour. The name gluten comes from the Greek word for glue and is comprised by a cohesive grey mass that, in baking, make the dough elastic and strong, thereby facilitating fermentation.

"Proteins from wheat form very exciting building blocks, with different properties depending on which protein we use – the whole gluten, or its components gliadin and glutenin. By mixing these proteins with potato starch, we have produced three types of composites with different properties in terms of hardness, strength and stretchability. There are many variants within the three groups, and the properties vary depending on production temperature, composition of the mixture and quantity of glycerol, which softens the material.

"In another project, we've succeeded in developing long and strong, as well as tiny and thin fibres from plant proteins and starch that can be used for textiles. These fibres are made using a process technology that is similar to cobweb-weaving. We can make fibres that are so thin they can only be seen in a microscope, while others are as thick as spaghetti," explains Ramune Kuktaite.

"We're now working on improving methods to "weave" even thinner fibres for textiles. With the optimal composition and processing, we can make very interesting materials."

At the MAX IV synchrotron laboratory in Lund, plant proteins and starch in bio-based materials and composites have been studied down to nanometre level.

"We found many interesting links between nanostructures and functional properties, that knowledge makes it easier to control and design different materials with desired properties. It will be exciting to return to the MAX IV laboratory when it is fully equipped and the brightest light source in the world for discovering the secret structures of the proteins is ready for use," says Ramune.

In terms of the raw material, Lyckeby is interested in collaborating with the researchers at SLU for production of the potato starch. And the gluten that is used is a side-product from the starch industry. These proteins and other plant proteins originating from by-products from various industrial processes, are attractive sources for bio-plastic materials.

"Our aim is to utilise protein rich raw materials such as by-products from other manufacturing processes and give them added value," says Ramune.

She likens the manufacturing process of the bio-based materials to making waffles.

"You mix the ingredients and "bake" them at a temperature around 130 ºC under pressure. It's not particularly complicated. The challenge is to make the right protein – plasticizer blend, thoroughly mix all the components to ensure the mixture is homogeneous. In principle, the processing equipment already exists in the petroleum-based plastic industry – it's just the raw material that has to be adapted."

The researchers have also started collaborating with Lund University on developing a method to shape the bio-based plastics in a 3D printer. In principle, the material can thus be designed in any shape.

The raw materials are not very expensive, however, they are more expensive than petroleum counterparts.

"We're showing what is technically possible, so in the next stage we'll see how it can be made cheaper and how the environmental advantages are to be evaluated. It's hard to compete with petroleum plastics in terms of price, but we're well on the way to developing materials with better properties. To start with, I think it's a matter of finding a specific niche for smart bio-based materials, such as for example smart textiles monitoring people's health.

"There are many different possibilities. We've developed a foam-like material from plant proteins that can be used for building insulation, plastics that are suitable for packaging, and protein-fibre composites that can be of great interest for the car industry. Many companies have showed interest in such materials including Volvo Cars," explains Ramune Kuktaite, one of the researchers in TC4F.