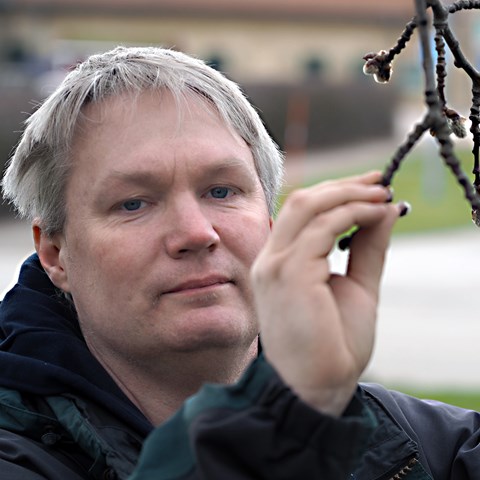 A fast-growing deciduous tree could be an alternative or complement to the spruce in Swedish forestry. Deciduous trees contribute to biodiversity, increased variation and societal values in the forest landscape. Poplar and hybrid aspen both have great potential, but more research is needed to identify reliable growing methods. One of the challanges is browsing and another is competing vegetation. Henrik Böhlenius is well on the way to generating knowledge with his research within TC4F.

Henrik's work focuses on poplar and hybrid aspen, both of which have the potential to produce 3-4 times as much wood as spruce under ideal conditions. Deciduous trees also contribute to diversity and increase variation in the forest landscape.

"We know quite a lot about cultivating the fast-growing trees on abandoned arable land, but forest land is completely different," says Henrik Böhlenius.

Previously he worked with forest genetics at UPSC (Umeå Plant Science Centre). This background was useful now that Henrik has switched from plant cells to practical, applied research at the Southern Swedish Forest Research Centre in Alnarp. His work involves building up knowledge and evaluating trials all over Sweden to identify good cultivation systems. The objective is to find and demonstrate successful methods so that the forestry sector can be confident about choosing one of the fast-growing deciduous trees as an alternative when new forest is planted.

There is a lot to be said for poplar, although there is currently less demand for the wood than aspen. The problem of the hybrid aspen is that it is very vulnerable to browsing damage throughout its rotation period. Fences to keep out moose and deer are necessary, but this is not a solution that can be used on a large scale.

"Our trials show that browsing is much greater on hybrid aspen than poplar. On 23 different sites, we planted groups of poplar and hybrid aspen, side by side. The trials showed that the poplar was less prone to browsing, and that there may be differences between different poplar clones. Some are more attractive to moose and deer than others. The analysis is not yet complete but, if it's successful, we'll have identified genotypes that are relatively resistant to browsing," says Henrik.

Both tree species are browsed during the spring and summer but, for aspen, browsing is more extensive. However, in the winter, there is no difference between the species in terms of browsing of the top shoot. At that time of year, the young trees can be treated with wildlife repellent, which is not possible in the summer because the plants grow so quickly (2-4 centimetres per day).

Even if the poplar plants are browsed, they usually continue to grow, and have a good ability to repair the damage. Once the poplar has reached a browsing-proof height, the tree, with its thick bark, is not so attractive for deer and moose. However, hybrid aspen, with its fine, smooth stems, still attracts browsing.

There are some 400,000 hectares of abandoned arable land throughout the country, affording great opportunities for both poplar and hybrid aspen.

"Realistically, we're perhaps talking about a potential of 50,000-100,000 hectares of fast-growing deciduous trees on abandoned arable land. In the forest, it's perhaps a couple of million hectares, and planting on even part of this can generate large areas," speculates Henrik.

On abandoned arable land, poplar can reach a browsing-proof height already in the first or second year. One option, tested successfully in the trials, is to plant extremely long cuttings (up to two metres). However, on stony forest land, planting these cuttings is a problem, and is a relatively expensive procedure.

"On abandoned arable land, all plant types work well – long and short cuttings, bare roots, and container grown plants – but forest land presents more of a problem. Our research shows that cuttings do not grow at all on forest land, the plant must have a root and containerised plants outperform bare-rooted plants. We're now trying to identify how the 'best' containerised plant should be produced," explains Henrik.

When planting new stands, one challenge is competing vegetation. On abandoned arable land, herbicides can be used, and another option demonstrated successfully in the project is to use mulching with fibre mats, but neither of these methods are allowed nor possible in practice in the forest. Herbicides are not permitted, and mulching with fibre mats is difficult to handle in the field.

Researchers estimate that the forest owner has approximately two years in which to establish plants in the forest before competing vegetation becomes a problem. Consequently, it is important to quickly create the optimal conditions in which the poplar plants can become established.

Unlike hybrid aspen, poplar struggles in acidic soils, which are the most common soil type on forest land. In greenhouse experiments, pH values around 3.5-4 result in plant death, and growth rate decreases if the pH is below 5. However, hybrid aspen is less sensitive to acidity.

At Tönnersjöheden, trials are taking place where scarification is combined with liming. This increases the pH value, even deep in the soil. First results indicate that, after two growth seasons, the plants are 1.4 metres high and are well-established. This means they have a good chance of reaching browsing-proof height in the third year. On comparable areas with no liming, the growth is half that amount.

"How lime should be applied is not fully understood and therefore needs to be investigated in more detail before this can be used in practice," says Henrik.

One method being tested to further improve establishment and boost growth is to combine lime, ash and fertiliser. Like lime, ash is basic, so application increases the pH value in the soil. The first results are very promising.

In reality, it is not a low pH value that the poplar cannot tolerate; it is another substance released when the soil becomes acidic that poplars cannot tolerate. By identifying the substance, it may be possible to find resistant clones of poplar that could survive the acidic conditions relatively well. So far, the trials seem promising.

Once the trees are established, one of the subsequent questions is how to perform pre-commercial thinning in the second generation and how to plan for the second generation. For hybrid aspen, which spreads many root suckers (50-100,000 plants per ha), trials ranging from corridor thinning to more traditional methods are used. The issue also applies to the poplar, which sends out many sprouts from stumps left after harvesting, but research shows that this might not be a problem. One of Henrik's experiments has demonstrated that, in time, one or a small number of stems become the dominant trees, with straight stems forming trees with a fine appearance. Alternatively, competing stems can be removed and used for bioenergy.

The trials have so far produced a growth of 25 cubic metres per hectare and year for poplar on abandoned arable land, which is somewhat better than the results for hybrid aspen. Results on forest land remain to be seen. New clones are being developed and will be tested throughout Sweden. Before they can be used on a large scale, reliable cultivation systems must be found.