Legume roots and nodules generally have a high N concentration and low C/N ratio, leading to a relatively rapid decomposition and release of N as compared to e.g. grass roots. But if from legume residues N is released at times of no or low plant N uptake it may generate environmental problems linked with N losses. Knowledge about factors controlling N dynamics during and after legume cultures is therefore essential in order to optimize legume-derived N use efficiency. This project aimed at exploring the heterogeneity of the rhizospheres of nodulated legume plants grown with and without a companion non-legume, in order to empirically investigate the importance of biological and environmental drivers of N dynamics at the scale of root and microbial interactions. Optical sensors, so called imaging optodes, based on solute-dependent fluorescence, together with a macro imaging system were installed in order to perform high-resolution in situ mappings of soil pH, O2 partial pressure and soil NH4+ concentrations in the rhizosphere. At the end of the plant culture experiment, soil and root samples were taken systematically in order to map heterogeneity in the abundance of nitrifying and denitrifying microorganisms. The experimental work is finished, and data analysis is in progress. 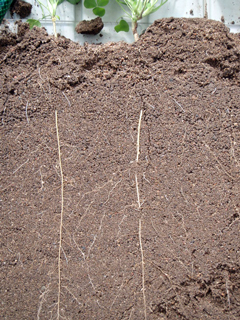