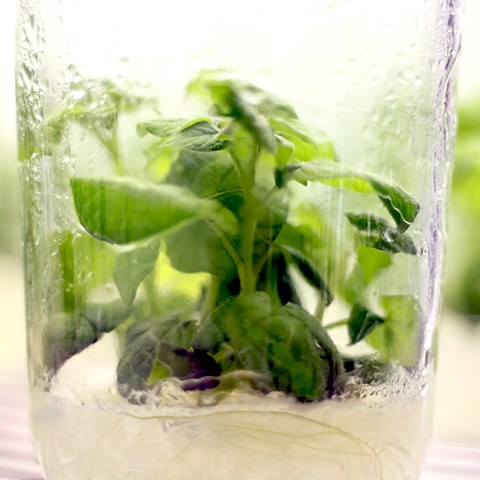 To take advantage of the growth potential in bioeconomy, it is crucial that the Scandinavian countries get the biobased entrepreneurship running– and here plant biotechnology is an important part. This is stated by eight plant scientists from Sweden, Norway, Denmark and Finland in an article in the scientific journal Physiologia Plantarum.

Scandinavia is not only unique when it comes to climate, temperature and day length, but also due to its specific regulations on the use of fertilizers and pesticides. Crop varieties, adapted to the region, have been developed both within government-funded programmes and by smaller breeding companies.

Unfortunately, the current global trend, with just a few large multinational companies, is resulting in a concentration of plant breeding to a few crop varieties developed for large markets. This poses a challenge for the development of crops well adapted to the unique climate of Scandinavia. In a recent paper, plant researchers from Scandinavian universities state that public investments in crop breeding for this region is of outmost importance for us to achieve a sustainable agriculture with reduced negative environmental impact, such as reducing the use of pesticides and an efficient use of fertilizers.

Another challenge is the climate change with a prolonged growth season and a changed precipitation pattern, which will lead to increased pressure from insect pests, plant pathogens, and other stresses on crops. These problems can only be solved by development of crop varieties adapted to the specific conditions in each region. Plant breeding is a slow process where gene technologies can help us to meet these challenges more quickly.

Europe is often seen as uniformly politically restrictive of gene technology. In reality, however, the variation is high between the countries. Between 2004 and 2014, Finland and Sweden voted according to the scientific recommendations when the EU would decide whether or not new GM plants would be approved, while Denmark voted against in 40 percent of the cases.

– However, in January 2017, we could note a change in Sweden's tradition of following the EFSA recommendations when Sweden voted against approval for cultivation of two maize varieties that are herbicide tolerant and resistant against an insect pest, says Dennis Eriksson, researcher in the Mistra Biotech programme at the Swedish University of Agricultural Sciences and lead author of the article. The argument was that cultivation of these two varieties would conflict with the Swedish environmental objective of a non-toxic environment as the use of the herbicide glufosinate, which is prohibited in Sweden, could increase in the EU as a result of the approval.

In Scandinavia, Denmark is the only EU member state implementing Directive (EU) 2015/412, which allows a national ban on the cultivation of genetically modified (GM) crops approved in the EU. The fact that other countries in Scandinavia do not invoke this is not surprising, as the approved maize varieties are not relevant for cultivation in northern Europe.

– It will be interesting to see how other Scandinavian countries will act on the directive when other GM varieties reach the European market. It is clear that the Scandinavian countries, primarily Finland and Sweden, represent an innovation-friendly and scientifically motivated attitude towards plant gene technology, compared to some other European countries, says Dennis Eriksson.

The public in Scandinavia, with the exception of Norway, is slightly less negative towards GMO compared to the rest of Europe. Although it is difficult to determine whether it is the national policy that reflects on the opinion, or the other way around, there seems to be no conflict between the two, the authors say.

– The relatively small markets in Scandinavia are a limiting factor for private investment in regionally adapted plant breeding. In addition to the importance of significant long-term government investment, it is also important to discuss the role of innovative solutions in plant breeding and research, and how these should be regulated, says Dennis Eriksson.

All of the Scandinavian countries are well positioned within the overall strategy to develop sustainable bioeconomies in Europe, and most of them have also adopted a national strategy for bioeconomy. The authors point out that a strategy is nothing without a clear implementation plan, and that plant biotechnology can be an important tool in the implementation of sustainability strategies.