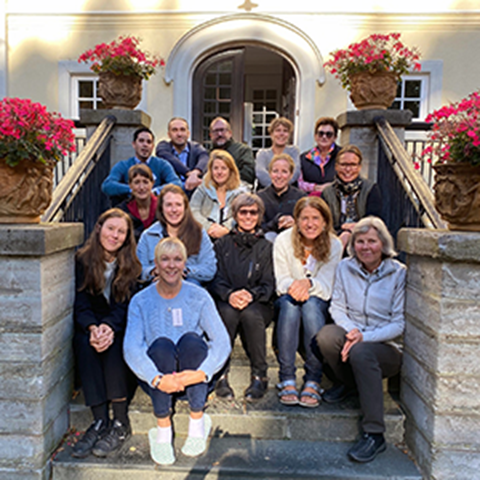 SLU's four Future Platforms invited senior as well as junior SLU researchers to Ekenäs Herrgård, for three days of discussions about interdisciplinary research. The focus was on environmental sustainability combined with forestry, food production, urban planning and one health. We asked for some reflections from the participants, whether this researcher residency gave inspiration to future projects, as well as applications, across disciplinary boundaries.

When autumn was at its finest, a group of SLU researchers went to Ekenäs Herrgård, just outside Flen in Sörmland. The participants came from different departments and faculties, all with a curiosity and interest in having the chance to participate in interdisciplinary discussions for three days.

The aim was to identify new links between the future platforms' areas of interest and build bridges between research fields by getting to know new colleagues and their areas of expertise and research fields. The hope was to provide inspiration and create a forum for curious conversations about environmental sustainability in combination with forest, food, health and urban landscapes as a starting point for the discussions.

The residency was announced as an open application to all SLU researchers and PhD students. The selection of the places was made based on a number of criteria, among other things, the applications were assessed based on the multi- and transdisciplinary potential they had with the aim of creating optimal interactions within a smaller collegial group. The ambition was also to get representatives from all faculties as well as several departments.

Coming together over the 'disciplinary truths'

It is important to have insight into how you need to work in order to meet the 'disciplinary truths' and the hope was to start a process among the participants. Leaving your daily life for a few days and giving yourself time for reflection about different concepts, methods, competencies, and approaches, gave inspiration for how you could work in other ways, together with others that you might not have seen as an opportunity before.

- Interdisciplinary work and research are not for everyone, but many need to get better at it and we need more people who work in a purposeful way with interdisciplinarity, in order to be able to deliver the necessary knowledge and contribute to today's societal challenges, says Marie Stenseke.

One of the most important goals for the future platforms is to develop interdisciplinary working methods at SLU by initiating and enabling collaboration across scientific disciplinary boundaries.

After the introduction, "Speed ​​dating" was on the program, where the participants in one minute got to introduce themselves and talk about "A challenge I see in my own research or in my research field". One of the participants pointed out, that an exercise like this would also be valuable to have with all colleagues within its own department as a basis for creating the conditions for more cross-over collaborations. The game "Taskmaster" was a team competition to get to know each other and begin the collaboration, as a warm-up exercise and kick for days two and three.

The program on day two included group discussions, where one of the exercises consisted of discussing a preliminary title and the purpose of a potential future interdisciplinary project. Two titles were chosen after lively discussions: Transformation towards sustainable production in a multifunctional landscape and lost and found farmers: Effect of land-use change on the rural environment.

What did the participants think?

How can researchers find each other across departmental and faculty boundaries? During the evaluation towards the end of the last day, one reflection from the group was that the infrastructure, nor the system itself, does not support and/or motivate this in an optimal way today. In order to create better conditions for interdisciplinary collaborations, a lot of things need to happen. Activities that also are in line with achieving "One SLU". Various forums, such as this event, can support and contribute to meetings across scientific boundaries taking place.

Some reflections from three of the participants:

- Getting the chance to meet like this gives us the chance to reflect on common challenges, regardless of research field, says Jeannette Eggers, program director at the Department of Forest Resource Management. It would be fruitful to have the opportunity to work more across disciplinary boundaries, we have a lot to learn from each other. However, the conditions for interdisciplinary collaboration and writing joint applications need to improve, believes Jeannette. Imagine if it was possible to easily search for different competencies within SLU, as well as challenges that different research disciplines are facing. It is difficult to get an overview of all research that is going on at one's own department, not to mention the entire SLU, she says.

- I learned that the advisory services in rural Sweden face similar challenges in the animal production, crop and forest systems, says Luis Andrés Guillén Alm, PhD at the Department of Forest Science (Southern Swedish Forest Research Centre). By taking and spending time together for three inspiring days, I now see possibilities to expand my work and learn from others. We have already taken steps to reconnect and think of how we can work across sectors, Luis continues.

- It was a “luxurious” experience to have time for interdisciplinary talks and networking with other researchers - such opportunities are rare, notes Lena-Mari Tamminen, researcher at the Department of Clinical Sciences. It is a great opportunity to be creative and create without “demands to deliver”. Meeting across the disciplines and coming to a consensus is a process that must be allowed to take its time, where everyone needs to be generous and have an open mind, for example not to see differences in viewpoints as a problem, Lena-Mari reflects.

As part of the evaluation, an exercise called "Popcorn evaluation" was used, where each participant said a word that described, or summed up the essence of these days. Words continued to 'pop' until it started to run out of new words, and as the word cloud below shows, words such as discussion, fun, opportunity, creativity, collaboration and respect were recurring: 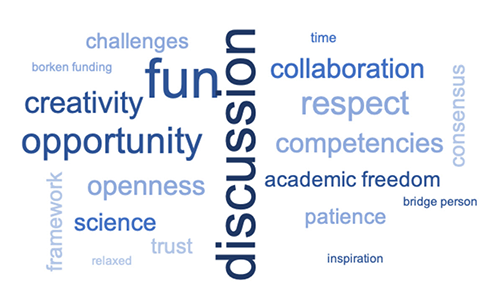 Is the research residency a recurring concept?

- We collaborate in several ways with the other three Future Platforms, but it was the first time that we arranged a research residency together. It definitely whetted the appetite, notes Susanna Sternberg Lewerin, program manager for SLU Future One Health. It is not impossible that there will be another chance to apply for a place next year, but I don't dare to promise anything at the moment, says Susanna. Imagine if we then received 100 applications? That would have been a positive sign of interest and ambition to work more across the disciplinary boundaries within SLU. 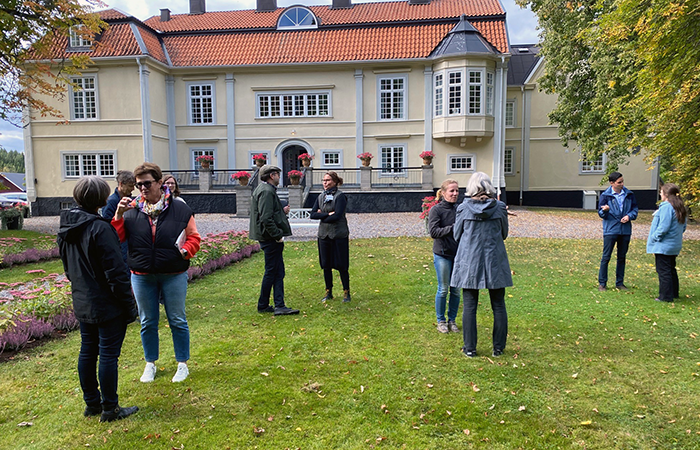 After the introduction, "Speed dating" was on the program, where the participants had one minute to introduce themselves and talk about "A challenge I see in my own research or in my research field". 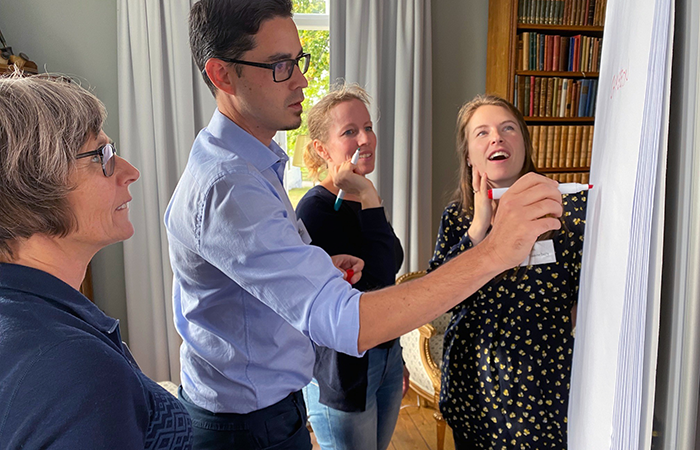 "Taskmaster" (based on a TV show) was conducted as a team competition to get to know each other and begin cooperation as a kick-off for day two and three. The game was carried out with great commitment! 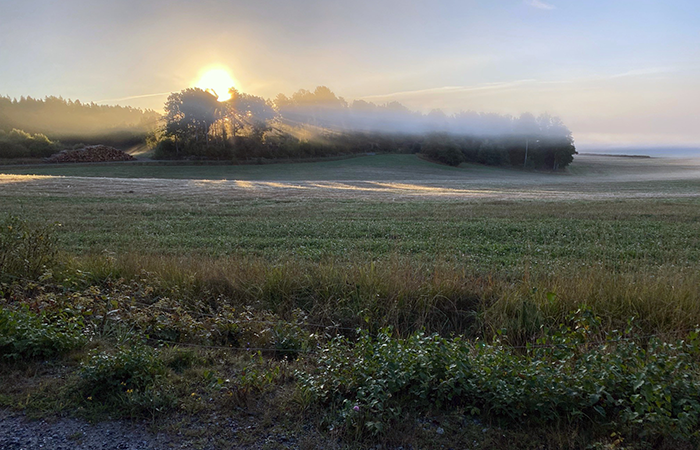 Ekenäs Herrgård is located in Sörmland and is surrounded by a beautiful agricultural and farming landscape. The picture was taken during Thursday's morning walk, before breakfast, when the sun is coming up above the treetops. The weather was nice every day and invited us to spend time outdoors, both between and during the group exercises. 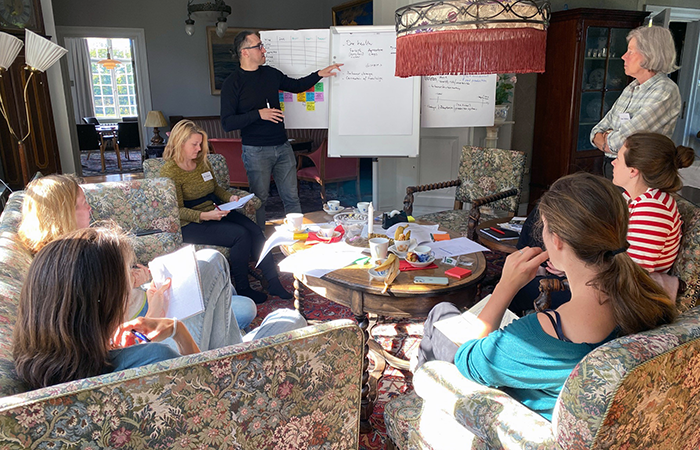 The program on day two included group discussions, where one of the exercises consisted of discussing a preliminary title and purpose of a potential future interdisciplinary project. 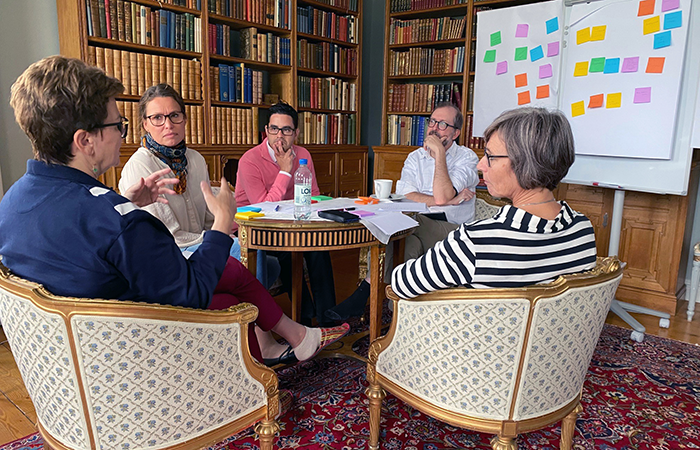 Group discussions took place in parallel in the different group rooms, all with names that refer to the house's history. 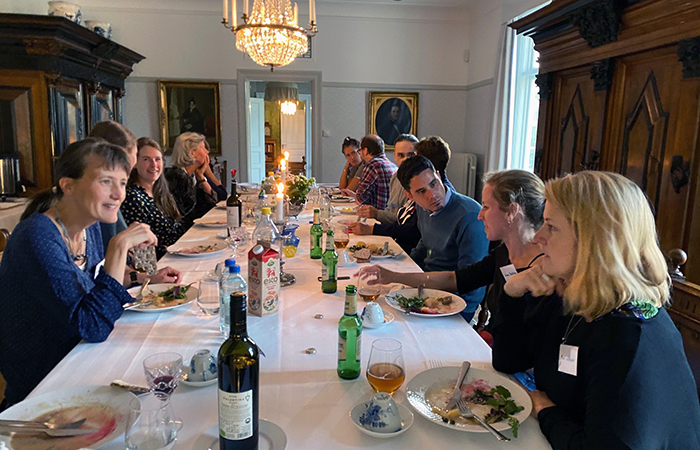 We were well looked after by Itte Weidman, housewife at Ekenäs Herrgård, who cooked fantastically good food - important for the overall experience and to keep the energy levels at their peak for good conversation and successful networking.

More about interdisciplinarity at SLU, events and more.