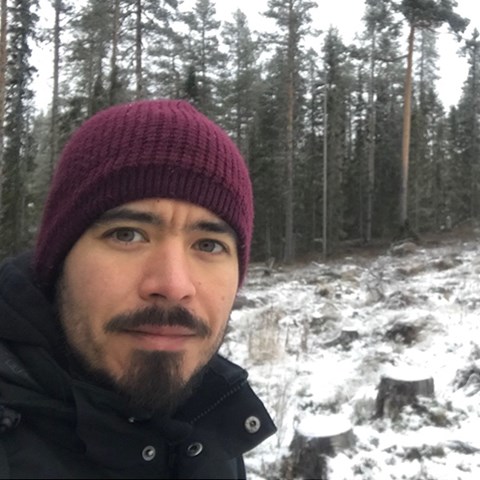 David Castro at one of his field sites close to Skellefteå (photo: selfie).

How do soil properties and microorganisms in the soil influence seedling growth? David Castro, PhD student in Vaughan Hurry’s group at UPSC and SLU showed in his PhD thesis that understanding this complex relationship can help to optimize biodiversity-friendly forest management and to get a better picture about the ecology of endemic species. David Castro will defend his PhD thesis at the Department of Forest Genetics and Plant Physiology, SLU, on the 24th of May.

During your PhD, you were funded by a scholarship that you got from Chile. That is very unusual for a PhD student in Sweden. What motivated you to apply for that scholarship and come to Umeå to do your PhD in Vaughan Hurry’s group at UPSC?

In 2015, me and my wife came to Umeå together with Cristian Ibáñez to work for a month with Maria Eriksson. We both fell in love with Umeå and the facilities at UPSC are amazing. It was also the time when I was preparing the papers to apply for the fellowship in Chile. I read about Vaughan Hurry’s research on suboptimal environments which was close to what I was working on during my Master thesis. I met with Vaughan, and he agreed on supporting my application for the fellowship which I luckily also received. It took then still one and a half years and many nerves until all papers were ready that I could finally come and start my PhD in Vaughan Hurry’s group. I am really happy that it all worked out and that I now can defend my thesis.

The title of your thesis starts with the question “Who comes first?” and mentions later the plant-microbiome-soil continuum. Can you answer the question now and why do you call it “continuum”?

“Who comes first” is rather a rhetorical question. The goal of my thesis was to understand the links between the plant, the microorganisms in the soil and the soil itself. We assessed plant growth and soil characteristics and used advanced sequencing techniques and bioinformatics methods to analyse how the plant and the microorganism, especially fungi, react to their environment. All three components are important and feedback each other. By allocating carbon to attract beneficial microbial partners, the plant’s roots modify locally the fungal and bacteria composition and also soil characteristics like for example soil particle aggregation, pH value and carbon content. Fungi and bacteria also allocate and move nutrients. Then there are also the physical and chemical characteristics of the soil which change during the year depending for example on the water content which is affecting the nutrient availability. That is why we cannot say who comes first. Every of the three partners influences continuously the other partners in a very complex manner and form together a kind of unit or “continuum”.

What do you consider as the major outcome from your studies?

One part of my thesis was on Prosopis species that are partly endemic in Chile but very invasive in other parts of the world and therefore of ecological interest. In Chile, Prosopis is growing partly on soil with very particular characteristics like for example in the Atacama Desert. Our experiments showed that when Prosopis seedlings manage to recruit beneficial fungal partners, they grow well in various kinds of soils except of in soil from the Atacama Desert which is very salty. This counts even for seedlings of Prosopis tamarugo which is growing very isolated in the Atacama Desert. The other parts of my thesis focussed on Scots pine and Norway spruce which are of economic importance here in Sweden. We could show that small amounts of nitrogen fertilization improve plant growth but only very minorly affects soil ecology and the fungal composition. Strong nitrogen fertilization has a positive effect on plant growth but strongly impairs the microbiota and also the soil ecology which can have a major impact on forest biodiversity.

What was the most unexpected result you got during your PhD?

We were expecting that Prosopis tamarugo which is growing in the Atacama Desert to be very stress tolerant but that was not the case. Actually, it showed to be a kind of weak seedling which had problems to recruit fungal partners during our experiments. Instead, the seedlings recruited many bacterial partners and we think that this was to partially compensate for the lack of fungi. They survived significantly less in its native soil that we used for our experiments. This was surprising because they have the potential to grow in this soil. Another species that we worked with, Prosopis chilensis, managed to recruit fungi even in soil from the beach but not Prosopis tamarugo which is growing in the most toxic soil in the desert. Our hypothesis is that the individuals, that are growing in the Atacama Desert, established themselves there when it was not as arid as it is now - probably about 100 years ago. The trees or bushes form a taproot which goes very deep into the soil and can reach the ground water. Once this root is established, they can survive also in such an extreme climate like in the Atacama Desert but for a seedling this environment is too harsh.

What was the biggest challenge you faced during your PhD?

Beside suddenly start working in English, it was very hard to learn bioinformatics. I knew a few things from before, but the work here was a different level. I got a lot of help from the people from the Bioinformatics facility at UPSC and from my colleagues. It took time and I followed many courses but now I feel proficient and confident to do bioinformatic analyses and add these skills to my CV.

What are you planning to do now?

I do like to live in Umeå and I would like to stay here even though the winter can be tough. I would also like to keep working with soil ecology and maybe include more the bacterial perspective as we focussed more on the fungal site during my PhD. There is not much done on bacterial soil ecology in the forestry context and I would like to work more on that. I would also like to reanalyse some of the data that we got focussing more on bacteria to see if we can get out more information that we have not seen yet. That is why I am currently looking for a postdoc.

About the public defence:

David Castro, Umeå Plant Science Centre, Department of Forest Genetics and Plant Physiology, Swedish University of Agricultural Sciences, will defend his PhD thesis on Tuesday, 24th of May 2022. Faculty opponent will be Barbara Hawkins, Centre for Forest Biology, University of Victoria, Canada. The thesis was supervised by Vaughan Hurry. The dissertation will be live broadcasted via Zoom.

Link to the SLU calender: https://www.slu.se/ew-kalender/2022/5/disputation-david-castro/

Title of the thesis: Who comes first? Implications of the plant-microbiome-soil continuum feedback on plant performance