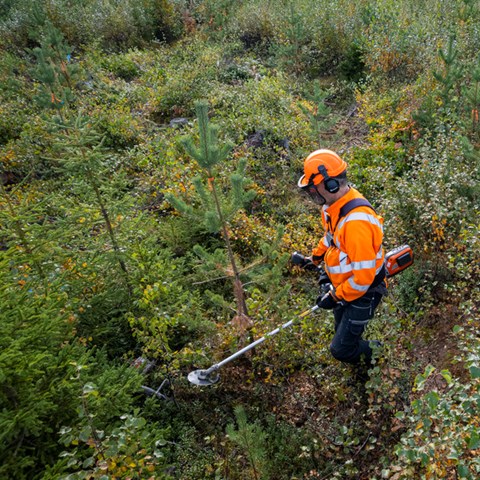 How should the forest be managed in southern Sweden today and in the future to contribute to the values in demand? This has been investigated in the research programme FRAS, Future Forest Management in Southern Sweden, which ends after five years of operation. SLU is one of three participating research organisations in the programme, which is now presented in a final report and excursion.

A series of results that can have concrete significance for forest owners and the forest industry's management and production of southern Swedish forests have been presented through the research programme FRAS.

The research projects have contributed to increased knowledge about the regeneration and production of pine and how digital tools can be used to secure the establishment of seedlings and increase the variety of tree species in regenerations. Knowledge of which clearing in planted pine and spruce can contribute to mixed forests, which properties favor the production of valuable birch and methods for how general nature considerations can be maintained throughout the rotation period are other examples of results from FRAS.

FRAS is the first research programme that brings together the three major forest research organisations in southern Sweden: Swedish University of Agricultural Sciences (SLU), Linnaeus University (LNU) and Skogforsk. The programme has also aimed at creating a network between academia and the forest industry to increase the knowledge and insights on the respective conditions and challenges of both parties. Several stakeholders from the forest sector have contributed to the programme and its content.

“We have created a platform where the research and practice can meet. This has brought the results produced in the research projects closer to the users which increases the chance that the results are implemented in practice”, says Karin Hjelm, SLU's representative in the programme management.

Karin Hjelm believes that one of the biggest challenges as a researcher is to reach out with the research results in practice so that society can benefit from the new knowledge. She feels that the FRAS programme has contributed to a constructive dialogue and has been an effective way to use and take advantage of the competencies within the participating organisations.

The research programme was established based on a need for more knowledge about how to meet the challenges forestry is facing as a result of a changing climate and increasing demands on the forest as a producer of raw materials and a place that can offer and develop social, natural and cultural values.

The purpose of admitting six doctoral students within the programme was to provide more potential forest management experts to the forestry industry, but also PhDs with a forestry profile who could pursue an academic career. Two of the research programme's doctoral students have completed their dissertations at the Southern Swedish Forest Research Centre. Mostarin Ara focused her project on clearing for increased variety, while Mikolaj Lula's project was focused on regeneration of pine in southern Sweden.