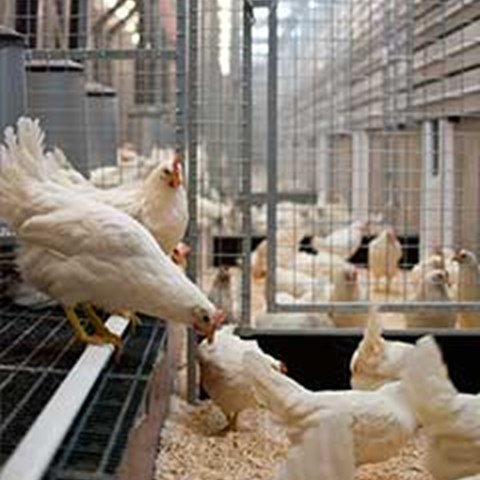 The goal with this project was to increase the understanding and knowledge about different ways of measuring welfare of laying hens.

The welfare of our laying hens is often questioned. A problem when discussing the welfare of laying hens is that there is not a total agreement between scientists on the optimal way to assess welfare. Today there are many different approaches on how to measure the birds' welfare, both invasive and non-invasive, which are currently under investigation in an ongoing PhD project.

Is it possible to get a good estimation about the hens' welfare simply by collecting feces or eggs or do we need to take a number of different indicators into account such as behavior, feather coverage, pecking damages and blood samples in order to get a fair idea? That is one of the questions hoping to be answered during the project.

Corticosterone is the dominant hormone released during stress in birds. One way of assessing stress is by measuring these levels in the blood. More recently newer methods have been developed where instead of blood samples the levels of corticosterone have been measured in feces and eggs. However, these newer methods have rarely been compared with the more proven methods for estimating welfare such as behavior, feather coverage, pecking damages and the ratio of different types of white blood cells (HL-ratio). The project aims to bring more knowledge about the different indicators for measuring stress and welfare in laying hens and to compare how they relate to each other.

The project includes three studies. The first study examined whether the secretion of corticosterone in feces follows a circadian rhythm as blood levels do. This information is missing in the current situation but is necessary to make a correct interpretation of the results from measurements in subsequent studies. Also whether the kind of feed the hens are given can affect the results were investigated.

In the second study hens were exposed to a brief stress by depriving them the ability to lay their eggs in nests for a short period. The level of fear, feather coverage, pecking damages, HL- ratio, egg shell irregularities and corticosterone in plasma, feces and eggs were studied during the experiment.

In the third study pullets were transferred from their rearing systems into a floor system were they were excluded from their litter area during the first couple of weeks. This procedure is sometimes applied in herds in order to facilitate the hens to find food and water and to reduce the number of floor-laid eggs (eggs not laid in the nest). This procedure does not only result in absence of litter, but also a reduction of space which could result in increased stress levels. Behavior including levels of fear, corticosterone in feces, feather coverage and pecking damages were recorded throughout the production cycle. Egg shell irregularities were also investigated.

The welfare indicators used in the studies will be compared and evaluated in order to increase the understanding and knowledge about different ways of measuring welfare of laying hens.