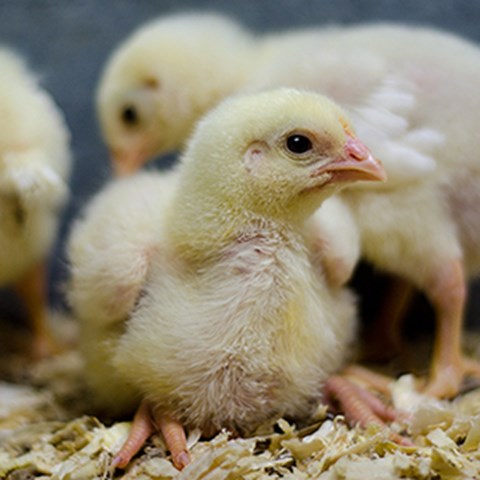 Including bioactive substances from brown algae or fungi biomass in chickens first feed will be evaluated in this project. The broiler chickens will either get access to feed and water already from time of hatch, or have to wait for a period corresponding to the normal situation in commercial settings.

To support the newly hatched chicken's development in an optimal way, the composition of its first feed is of high interest to consider. So-called bioactive substances can stimulate a certain gut microflora and promote the immune system when included in small amounts in the feed. In the Netherlands the concepts on-farm hatching and hatchers providing feed and water have been developed, which are different ways of providing chickens with feed and water already when they hatch.

The hypothesis in this project is that prebiotic effects of filamentous fungi and macro algae feed additive will promote development of a more robust chicken, with an enhanced positive effect when feed and water are available already during hatching.

It is well established that so-called bioactive substances can stimulate a certain gut microflora and promote the immune system when included in small amounts in the feed. Brown algae and fungi are sources of different bioactive substances. In this project the brown algae Laminaria digitata will be evaluate as a novel feed additive in broilers' first feed. The claimed prebiotic effects and ability to enhance immune function in L. digitata are mainly linked to its different polysaccharide fractions. Read more about brown algae and their bioactive compounds

Production of bio-ethanol results in large volumes of wet grains and thin stillage. These two components are traditionally dried into Destiller´s Dried Grain with Solubles (DDGS). Due to a high content of complex carbohydrates, the DDGS produced from wheat is not a good protein source for chickens because it generates increased digesta viscocity, reduced nutrient absorption and in the end impaired litter quality and inferior foot pad condition. Lantmännen Agroetanol AB has developed a process where the edible fungi Neurospora intermedia is cultured in the thin stillage. This fungi has the ability to degrade complex carbohydrates, resulting in additional ethanol and a protein-rich fungal biomass. Like many other fungi, the cell walls of N.intermedia have chitin as major component. Due to its complex structure, chitin is degraded in poultry only to a limited extent. However, some degradation occurs in the ceaca resulting in bioactive chito-oligosaccharides that may enhance immune function and stimulate the development of a healthy gut.

The project period is 2017-2019 and the project is funded by the Swedish Farmers Foundation (SLF).