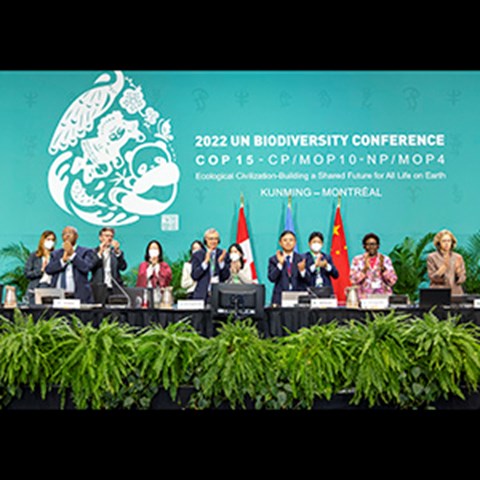 The Convention on Biological Diversity (CBD) is the international legal instrument for "the conservation of biological diversity, the sustainable use of its components and the fair and equitable sharing of the benefits arising out of the utilization of genetic resources" that has been ratified by 196 nations. Its overall objective is to encourage actions, which will lead to a sustainable future.

CBM has from the beginning supported, and often participated in, the Swedish national delegations to the Conference of Parties (COP) of the CBD, its Subsidiary Body on Scientific, Technical and Technological Advice (SBSTTA), and its Working group on Article 8(j) concerning the traditional knowledge of indigenous and local communities relevant for the conservation and sustainable use of biological diversity. CBM has also been given the task to draft the Swedish national report to CBD on a number of occasions.

Convened under UN auspices, chaired by China, and hosted by Canada, the 15th Conference of Parties (COP 15) to the UN Convention on Biological Diversity adopted the Kunming-Montreal Global Biodiversity Framework (GBF), including four goals and 23 targets for achievement by 2030.

COP-15 was the most important meeting of the CBD since COP-10 in Nagoya in 2010. In Nagoya, the convention's global goals until 2020, the so-called Aichi goals, were established. We know that the Aichi targets were largely not met, for example through the IPBES Global Assessment of the State of Biodiversity.

The director of SLU Center for Biological Diversity, Torbjörn Ebenhard, participated in the Swedish negotiating delegation, and was also one of the negotiators for the EU.

Torbjörn Ebenhards thoughts on the results of the negotiations:

"I am satisfied with the results of the negotiations! As always in convention decisions, this is a compromise and it does not include everything we wanted, but it's good enough. It´s actually better than I had dared to hope for, given the great disagreements between the parties we have seen throughout the series of negotiation meetings.

We now have four overarching goals for 2050 that set a high bar for the desired state of biodiversity, sustainable use, the equitable distribution of benefits from genetic resources, and for financing of implementation. In addition, we have 23 action targets for 2030 that specify how we should address the direct driving forces that cause biodiversity loss, how we address the indirect driving forces in society, and provide guidelines for the implementation of the framework.

What is missing, among other things, are milestones for the state of biodiversity in 2030. We have the target for 2050, but no quantification to show how far we must reach by 2030. Nor do we have a clear target to reduce the global ecological footprint. But we have enough for the countries of the world to start working to stop the loss of biological diversity and make the use of natural resources sustainable. Now it is up to the governments of the world to get started and involve the whole of society in this work." GBO-5 provides  global summary of progress towards the Aichi Biodiversity Targets and is based on a range of indicators, research studies and assessments (in particular the IPBES Global Assessment on Biodiversity and Ecosystem Services), as well as the national reports provided by countries on their implementation of the CBD.

The 2030 Agenda and Ecosystems - A discussion paper on the links between the Aichi Biodiversity Targets and the Sustainable Development Goals. Report by Torbjörn Ebenhard from CBM and Maria Schultz and Tristan D. Tyrrell from SwedBio.