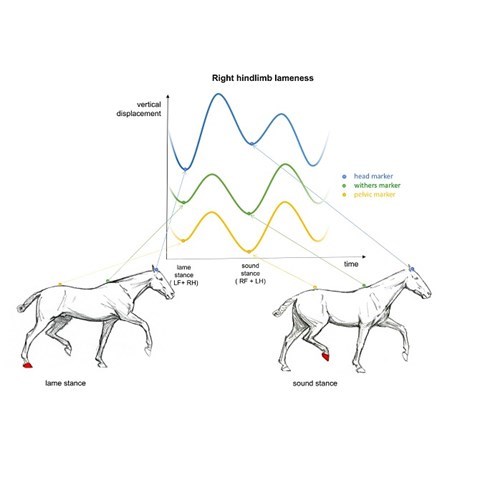 Objective motion analysis using sensor or camera-based systems is becoming increasingly common as an aid in investigating the lameness of a horse. According to the current standard, the head movement is measured to detect front limb lameness and pelvic movement to detect hindlimb lameness. However, the analysis is made more difficult by the fact that horses with hindlimb lameness often nod with their heads to move the weight forward to relieve the painful hindlimb. This can cause a hindlimb lameness to be mistaken for a forelimb lameness.

In a research project initiated by researchers at the Swedish University of Agricultural Sciences, in collaboration with several European universities, a study has been carried out with the aim of more clearly distinguishing genuine hindlimb lameness. Temporary front and back limb lameness were induced in 10 horses with the help of specially designed shoes that produced pressure against the underside of the hoof (sole pressure model). Changes in the pattern of motion were analyzed when the horses were trotting on a force-measuring treadmill. By measuring the wither's movements one could distinguish between a nodding movement from the head caused by a forelimb lameness and a nodding movement caused by a hindlimb lameness.

These results make it easier to distinguish genuine hindlimb lameness from false one, thus increasing the safety of the diagnosis of orthopedic lesions of the horse. However, further studies on horses with various orthopedic injuries are required to verify the findings from the study.

The study was financed by Formas and the Swedish-Norwegian Foundation for Equine Research.