The objective of this project is to increase the yield and the yield stability of the grain legume crops pea, faba bean, lupin (L. angustifolius) and intercropped pea and barley by optimizing the choice of precrop to the respective grain legumes. The project is a pluriannual larger matrix experiment in which the precrop effect of spring barley, spring barley followed by a catch crop, oats, spring oil seed rape, sugarbeets, alfalfa and maize on the mentioned grain legume crops is determined, including how the precrops influence available water in spring and early summer. In the third year winter wheat is grown on all plots to determine the effect of grain legumes on succeeding crops. There is a requirement to strengthen the research on grain legumes, since these crops has a key role in future sustainable agriculture. 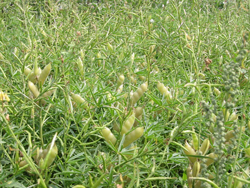