There is a greater interest for using cubicles for the housing of growing-finishing young bulls. The function of the cubicles was investigated throughout the rearing period for young bulls of beef cattle from weaning to slaughter. The cubicles were dimensioned according to the final size of the animals. Manipulations of some details of the cubicles were made which controls the longitudinal space of the cubicle: position of the neck bar and introduction of a brisket board according to the length of animals and a combination of them. The cubicle width was kept constant during the experiment (1.12 m). Also, the impact of a plastic cubicle floor side separator (12 cm high, one meter long, placed between the stalls) was studied in a group of heifers on 2 occasions regarding cubicle hygiene. Cubicle hygiene, animal hygiene, lying behavior and how animals used the cubicles were recorded during three periods.

The problems of poor hygiene were greatest during the 1st period and then decreased. The combination of neck bar and brisket board placed according to the size of the animals resulted in better cubicle floor hygiene than only  neck bar and brisket board plank separately. Animal hygiene improved during as animals became larger. In the beginning of the study, shortly after animals were weaned and housed, the animals lied in the cubicles about 1/4 of the time with the head (incorrectly) against the alley. This was later reduced, to completely have ceased at the end of the rearing period. The combination of neck bar and brisket board was most efficient in controlling hygiene but did not reduce the defecation in the front part of the cubicle. Cubicle floor side separators had no effect on flooring hygiene. There is potential for further development of cubicles for growing animals.

-          Cubicle floor side separators did not prevent contamination of the lying area in cubicles, but the animals were positioned straighter in the cubicles. 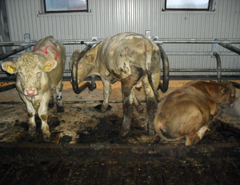