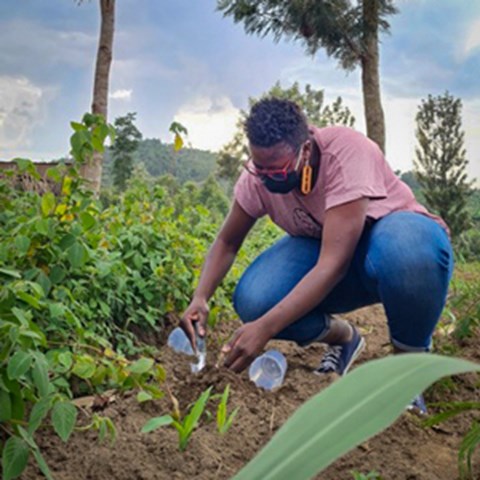 Food insecurity is expected to worsen with population growth, land-use change, and climate change. One way to develop sustainable smallholder agricultural systems in East Africa is to use push pull cropping systems. Researchers from SLU are now investigating how to optimize this technology in Rwanda.

– One of the aims here is to protect maize crops from stem borer moths and fall army worm that can destroy the crop, says Grace Amboka who is now doing her PhD on the subject.

Pushing and pulling pests away from the crops

Push-pull typically includes intercropping maize with a repellent legume (Desmodium spp.) that pushes the insect pests away from the maize while simultaneously attracting them to a trap crop, Napier grass or Brachiaria. Push-pull cropping systems can reduce pests and weeds, improve soil fertility and increase yields for small-holder farmers.

– However, the effects of the approach are context-dependent, and it is not known how it will fare in a changing climate. My PhD project aims to improve our understanding of when and where push-pull is likely to function best, says Grace.

– In Rwanda, we are in collaboration with Food for the Hungry – Rwanda and Rwanda Agricultural Board. This field work in Rwanda is part of the project Upscale which includes four more study regions in East Africa; Ethiopia, Kenya, Tanzania and Uganda, says researcher Mattias Jonsson.

Researchers from SLU are investigating how to optimize push pull technology in Rwanda.

Food insecurity has been a chronic problem in Africa and is expected to worsen under current population growth scenarios, land-use change, and climate change. Small farms produce an estimated 90% of agricultural output, with maize being a major staple and cash crop in Africa.

– This ecological intensification technology reduces the conflict between crop production and the conservation of biodiversity and ecosystem services. In addition, it is a sustainable management practice, cost-efficient, and environmentally friendly biocontrol solution to Fall Armyworm, stem borer, and Striga weed, concludes Grace.

The push-pull technology is a cost-effective, and long-term management practice created for African smallholder farms. It is a cropping system developed by ICIPE and partners that reduces pest pressure by providing repellent stimuli (push), combined with attractive stimuli (pull). Push-pull was developed to protect maize crops from stem borers but has been found to also reduce the fall army worm, Striga weeds and improve soil fertility.

The UPSCALE project aims to take key steps to realize the transformative potential of push-pull technology, to address food security, livelihoods and climate change resilience in the sub-Saharan region of East Africa.