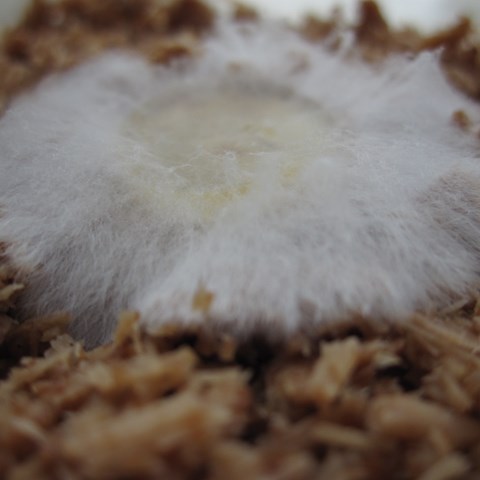 Recent studies show that conventional wastewater treatment plants are ineffective in adequately removing several organic contaminates, commonly called micropollutants. New methods such as ozonation and active carbon filtration have been demonstrated to be efficient in removing these substances. However, in some situations wastewater treatment techniques based on biological processes are of interest as low-cost alternatives. Parallel with this need, a large body of research shows that bioremediation based on fungi, mycoremediation, is highly efficient for degradation of micropollutants. The main explanation for this is the capacity of certain fungal species, white-rot fungi, for extracellular release of lignin-degrading enzymes such as laccase and manganese peroxidase. In the present study the focus will be on the oyster mushrooms (Pleurotus ostreatus) which is one of the most produced and enjoyed mushrooms in the world. This white-rot fungi has high potential for growing on different lignocellulosic residues and in the present study it will be evaluated for laccase and manganese peroxidase production on straw, sawdust from deciduous trees and brewer´s spent grain respectively. The material with the highest production of laccase and manganese peroxidase will be evaluated for its potential to reduce concentration of the micropollutant diclofenac in contaminated water. From an applied perspective it can be concluded that the material will have a low production cost and that the used filter material is not dead-end but have potential use as biogas substrate. From a safety perspective it should also be pointed out that P. ostreatus and the raw material used for its propagation is naturally occurring in the environment and that no spore production is involved in the process.