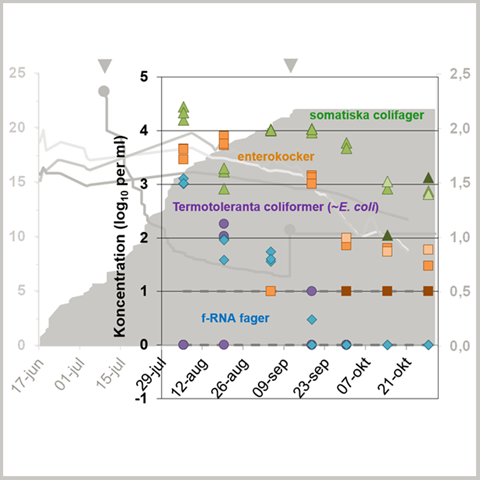 Many of our organic wastes streams, particularly toilet and animal waste, contain nutrients and organic matter – useful for agricultural production. However, they also contain pathogenic micro-organisms (pathogens). Before these resources are returned to the agricultural fields, they need to be sanitised, ie pathogens must be inactivated/killed. Sanitisation is an important step in nutrient recycling to ensure the safety of humans, animals and the environment. To determine the degree to which the material will need to be sanitised, we use quantitative microbial risk assessment (QMRA).

We focus on developing sanitising technologies that produce a safe, high quality fertiliser. Primarily focusing on technologies for source-separated fractions that don’t require flush water. Keeping the urine and faeces factions separate and undiluted (by not mixing with water) also reduces infection risks during handling, transport and processing as there are smaller volumes to handle. Treatment technologies that do not achieve sufficiently high reduction/inactivation of pathogens can still be advantageous by providing volume reduction. Such treatments can be combined with a sanitisation, thereby providing effective disease control.

We study treatment and sanitisation technologies and then develop models to be used with the technologies to estimate the inactivation of pathogens from easily measurable process parameters such as temperature and pH (Fidjeland et al., 2015). The modeling of the parameters is used to ensure proper sanitisation of the material once the technology is implemented. Our research is applied both in Sweden and globally, and therefore, we study the inactivation of many different pathogens, such as resistant parasite eggs (Ascaris) (Nordin et al., 2009a), viruses (Emmoth et al., 2011; Magri et al., 2015) and various bacteria, including Salmonella.

Our work with sanitisation looks at different effective methods such as ammonia, drying, high pH, heat and composting. Sanitisation with ammonia is a reliable method and the principle is the same as when the source-separate urine which self-sanitises during storage (Vinnerås et al., 2008). For materials with low ammonia concentrations, the ammonia content can be increased which also increases the nutrient value of the treated material (as ammonia contains nitrogen which is an essential macro nutrient for plants) (Nordin et al., 2009b; Nordin et al., 2015). The ammonia technology was developed in our lab and is now used by many municipalities for source-separated toilets (black water) (Nordin & Vinneras, 2015) and recommended by the Board of Agriculture for the treatment of Salmonella infected manure (Ottoson et al., 2006).

Drying as a treatment method has the advantage that the volume of the treated material decreases and concentrated nutrients which facilitates easier transportation and fertilisation. This method is very beneficial for the source-separated urine, but then requires that the enzymatic degradation of urea is stopped at an early stage (Senecal & Vinnerås, 2017). By stopping the enzymatic activity, there will be no ammonia formed, but with the high pH and the low moisture content of the treatment the pathogens are still inactivated.