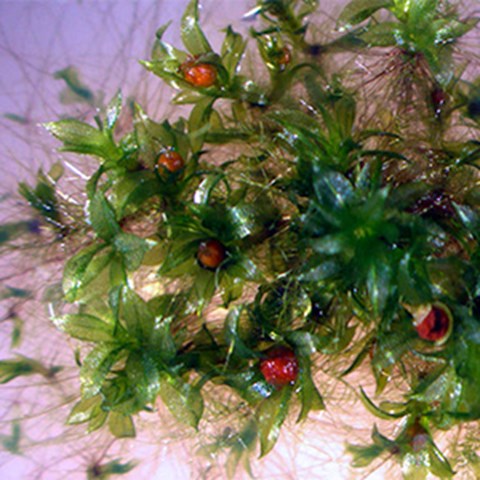 Moss colony with sporophytes from Uppsala found in a paddock outside Wiik's Castle.

In the research area Microbial Metabolism, we are studying the metabolism and how it is regulated by experiments in baker's yeast, a classical model organism in biological research. We are also using Physcomitrella, a small moss plant that can be grown in petri dishes, in our research.

We are particularly interested in how the availability of nutrients and energy controls the metabolism. I yeast, glucose is the preferred energy source, and the metabolism is therefore regulated by glucose. We discovered and characterized the glucose repressor Mig1, a yeast protein that mediates this control [1]. We have continued to study how the metabolism in yeast is regulated by the availability of nutrients, and how this control affects other biological processes such as stress resistance and aging.

Our work with Physcomitrella has focused on how the availability of energy controls metabolism, growth and stress resistance in plants. We found that two proteins that are involved in glucose repression in yeast, hexokinase and the protein kinase Snf1, play similar roles in moss [2,3]. We are also developing genetic methods for Physcomitrella that are based on methods from yeast. One important such method is the use of plasmids, small DNA molecules that can replicate both in moss and in bacteria [4].

We are currently using both yeast and Physcomitrella to study the function of the regulatory part of RNA polymerase II, the so called Mediator, and its role in stress signaling and stress resistance. This is part of a strategic collaboration between five groups att SLU and Umeå University.

We are also using yeast as a pharmacological model system to stydy the uptake, metabolism and mechanisms of action of anti-cancer drugs, in particular 5-fluorouracil. 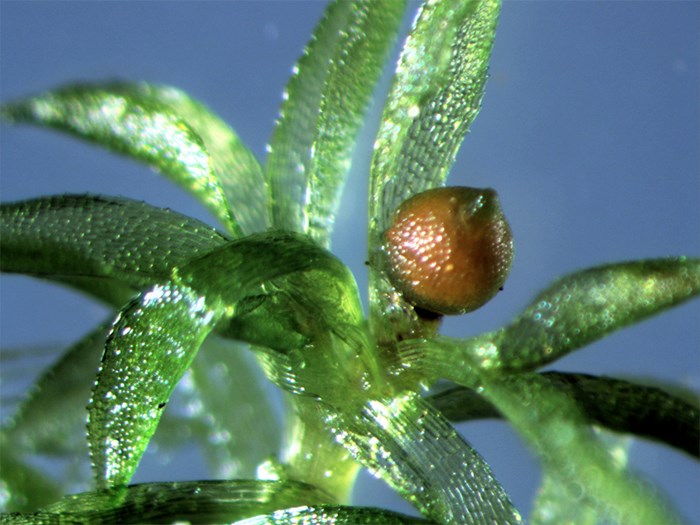 Mediator Function in Plants and Fungi

Mediator is a large complex of more than 20 proteins that binds to and regulates RNA polymerase II, the enzyme that transcribes (expresses) genes encoding proteins. Signals that are mediated by different signaling pathways converge on Mediator, which is the central switchboard in gene regulation. We participate in a large project funded by the Knut and Alice Wallenberg Foundation in which we are studying the function of Mediator and in particular its roll in stress signaling and stress resistance in plants and fungi.

Studies of Anti-Cancer Drugs in Yeast

Baker's yeast was the first eukaryote in which it became possible to use molecular genetics, and there exist several powerful methods in yeast that are not available in other eukaryotes. We are using such methods to study the uptake, metabolism and mechanisms of action of anti-cancer drugs in yeast. One anti-cancer drug that we are studying is 5-fluorouracil, one of the oldest and most widely used drugs for cancer treatment. We have previously found that one important target of 5-fluorouracil is tRNA synthesis. We are now studying genes that confer resistance to 5-fluorouracil when overexpressed in yeast.

The small moss Physcomitrella has rapidly become an important model organism in plant research. The reason for this is that it is possible to use homologous recombination to knock out genes in Physcomitrella, something which is not possible in other plants. We have shown that plasmids that replicate in moss can be rescued back to bacteria. This finding opens up the possibility of using methods based on shuttle plasmids in moss. We are currently developing and testing such methods, which are based on existing methods used in yeast.

Starvation and Aging in Yeast

Most organisms live longer if you reduce the food supply. This phenomenon is called caloric restriction, and has been observed in unicellular organisms such as yeast and in different animals from nematodes to monkeys. We are using the yeast Saccharomyces cerevisiae as model organismto study rhe mechanisms responsible for caloric restriction. Rapamycin is a drug isolated from bacteria found on Easter Island that inhibits nutrient sensing and thus slows down aging. We are studying gene expression downstream of the TOR (target of rapamycin) kinase, which is inhibited by rapamycin. 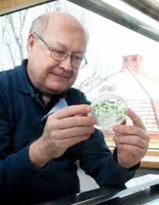