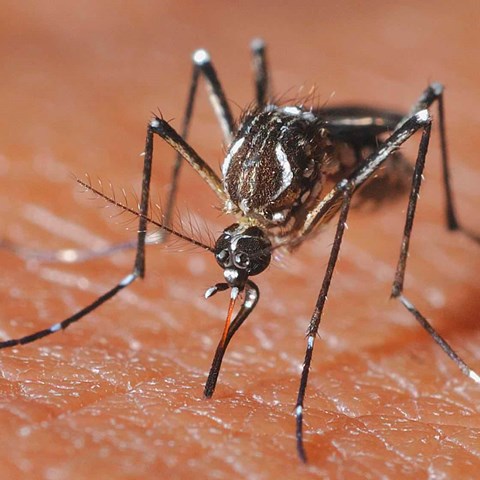 The chemical ecology of blood feeding insects is our field of research, with the primary focus on disease vector mosquitoes. Through a cross disciplinary approach, we investigate behaviours driven by interactions between the mosquito and their chemical environment, and the mechanisms underlying these vector-related activities.

Some of the questions we currently address are:

Read more about our current projects below.

Plant feeding affects the ability of mosquitoes to vector diseases. We investigate the natural mosquito-plant interactions at the behavioural, physiological and molecular level, and how we can use this information in developing mosquito control tools to complement existing integrated vector control strategies.

We are interested in investigating the molecular and neural mechanisms regulating the olfactory system of mosquitoes at different physiological states, e.g. age, blood fed and/or infected.

Odorant receptors play a crucial role in host-seeking behaviour of mosquitoes. Within the Anopheles gambiae species complex, these closely related sibling species differ in their host selection: human preferring (anthropophilic) Anopheles coluzzii, animal preferring (zoophilic) Anopheles quadriannulatus and either (opportunistic) Anopheles arabiensis. To date, little is known about the relationship between such behaviours and the structure-function properties of their odorant receptors. We study the molecular profiles of odorant receptors (odorant: receptor interaction) among the sibling species that contribute to the selection of a host.

We investigate the genetic basis of host preference in a main malaria mosquito Anopheles arabiensis, which is an opportunistic and predominantly outdoor feeder (exophagic). This mosquito species has a high degree of plasticity when it comes to host preference: some populations are mostly human biting (anthropophilic) while others are mostly animal biting (zoophilic), and even within one population, different host preferences occur. In order to assess the risk of An. arabiensis mosquitoes to transmit malaria, we need to determine whether this population is more likely to bite humans or animals (the degree of anthropophily). The differences between the genomes of human preferring and animal preferring mosquitoes (genetic markers) will be identified and analysed for their potential as tools to assess the risk that different mosquito populations pose as vectors of malaria.

To determine what odours are important to gravid females, we investigate the odours emanating from the oviposition sites of different species. To find out which particular transmission channels are involved in oviposition behaviours, we use a multifaceted approach combining the analysis of olfactory-related neural activity, gene expression and behavioural responses.

How do mosquitoes navigate a complex environment to find their resources, e.g. nectar, blood, resting- and egg laying sites?

Here, we are interested in taking the targets that are identified in our other projects, e.g. odour blends and taste stimuli, and developing new tools to complement existing integrated vector control strategies.

From plant sucker to blood feeder: a mosquito story

The ancestral trait of mosquitoes is to feed on plant fluids. So, how did mosquitoes find humans as food?

How does a moth become a vampire?

Postdoctoral position In the evolution of mosquito preference for humans

The Swedish University of Agricultural Sciences (SLU), Department of Plant Protection Biology, has an open position for a postdoc in the chemical ecology of disease vectors. The postdoc will assess how minor structural changes in odorant receptors over evolutionary time impact mosquito odour space and resulting host preference.