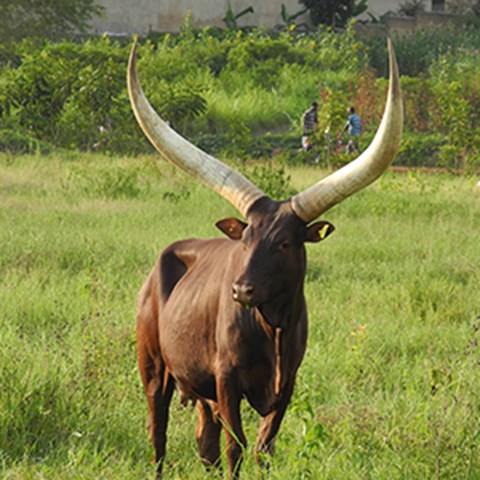 The milk in Rwanda is usually produced by imported Holstein cows that have been cross-bred with different local breeds to varying degrees, but also by indigenous Ankole cows like this one. Photo: Renee Båge

Dairy cows are of great cultural and economic importance in Rwanda, where there is an endeavor to improve children's nutritional supplies through secure access to milk. However, most of the milk is produced by small farmers with single cows, and poor hygiene, poor udder health and penicillin-resistant bacteria are obvious problems. About this, and about possible countermeasures, Jean-Baptiste Ndahetuye writes in a dissertation from SLU.

Both the number of cows and their milk production are increasing in Rwanda today. This is largely due to measures in national programmes that are based on the great importance of milk for the nutritional status of young children and their growth and cognitive development.

In his doctoral work at SLU, Jean-Baptiste Ndahetuye examined the hygienic quality of Rwandan milk, and the connections to udder health, hygiene and other care and breeding factors.

The overall conclusion is that subclinical udder inflammation, ie. those that do not produce visible changes in udder or in milk are common in dairy herds. In addition, most of the pathogenic bacteria found in the milk were found to be infectious and highly resistant to penicillin.

- The high bacterial pressure in the entire production chain is important for the quality of milk, for the ability to process milk products and for public health," says Jean-Baptiste Ndahetuye.

In the dissertation, a number of factors are raised that increase the risk that the cows will suffer from subclinical udder inflammation. This applies, for example, if they were housed in an individual field (kraal) and on the earthen floor, if they were in the later part of their milk production, if they were of holstein breed, if they had dirty udder and bones, if they did not have a calf that suckled, if they were not fed directly after milking, if the milker did not wash his/her hands and if there was poor hygiene during the milking, and the absence of foremilk stripping.

- A control programme against udder inflammation would be a good action for optimised milk production in Rwanda, concludes Jean-Baptiste Ndahetuye.
___________________

Jean-Baptiste Ndahetuye, Department of Clinical Sciences, defended his doctoral thesis Mastitis in dairy cows in Rwanda: characterization, prevalence, aetiology, antimicrobial resistance and effects on milk quality on 5 December, 2019 at SLU in Uppsala. Opponent was Professor Päivi Rajala-Schultz from the University of Helsinki, Finland.

Questions in Swedish can be asked to Renee Båge, principal supervisor and university lecturer at the same institution: renee.bage@slu.se, +46 (0)18-67 25 07

(May freely be published in conjunction with articles on this press release. Photographer should be listed.)

The milk in Rwanda is usually produced by imported Holstein cows that have been cross-bred with different local breeds to varying degrees, but also by indigenous Ankole cows like this one. Photo: Renee Båge

The milk is not cooled on the farm but transported unchilled on a bicycle or motorcycle in milk bottles or plastic cans to milk collection centers. Photo: Renee Båge

Almost all cows in Rwanda are hand-milked. Photo: Renee Båge

The milk is not cooled on the farm but is transported unchilled on a bicycle or motorcycle in milk bottles or plastic cans to milk collection centers, where the milk is cooled for the first time when it is poured into a larger milk tank.

The milk that is handled and processed further in this formal milk chain is usually pasteurised before sale, but there is also an informal milk chain where the milk is sold directly to consumers or in small local markets, unpasteurised.

The vast majority of families are aware that they should heat the milk before consumption. However, the authorities are trying to get all milk producers to supply to the official milk collection sites and reduce the informal market.