PAKI ("Planning of heritage interpretation") is a three-year (2014-2016) research project being conducted collaboratively by the Centre for Nature Interpretation and Environmental Communication Unit in SLU’s Department of Urban and Rural Development. Our purpose is to describe and better understand how interpretation is offered at natural and cultural heritage sites and, in collaboration with practitioners at those sites, to develop a planning model for guided tours and exhibitions with a focus on meaning making by visitors.

Interpretation (in the form of guided tours and exhibits about natural and cultural heritage) can play an important role in visitors’ perceptions of their history and cultural heritage, as well as to the personal connections they make to past, present, and future landscapes. Interpretation can potentially provide not only a context for these perceptions, it can also start a conversation about identity and community values. But without a policy and planning approaches that focus on providing this context, there is a risk that interpretation will achieve little more than providing entertaining facts to pleasure seeking audiences.

In "PAKI," we are examining issues that are relevant for site managers to ask when deciding how to interpret the natural and cultural heritage for visitors. Our action-research approach ensures that our work is carried out in collaboration with heritage site managers and the people who work professionally with guide services, interpretive program development and exhibition planning for visitors.

The project aims to develop, implement, evaluate, and describe a model for the planning of heritage interpretation, focusing on the meanings that visitors to heritage sites actually make and the contexts they attach to such places as a result of interpretation.

In step 1, we document and analyze how the current interpretation situations work: What actually occurs when heritage site visitors engage with an exhibition or when a guide interacts with participants during a guided tour? To answer such questions, we are conducting interviews with visitors and asking them to describe their thoughts and experiences with interpretation. In addition, we are filming the interaction between guides and participants and documenting both the content of exhibits at several heritage sites and the ways in which visitors interact with them.

In step 2, we will explore with site managers, guides and planners their reactions to our findings in step 1. That is, "If this is what is actually occurring in the interpretation process at your site, what questions do we need to ask ourselves when we plan interpretation and when we make decisions about the form and content of the interpretive services we are going to offer to visitors?"

The methods we use to document and analyze the interpretation situation at each heritage site are designed to focus mainly on "meaning making by visitors," "communication," "interaction," and "system boundaries" (e.g., functional areas at a site that are dedicated to different types of interpretation). These aspects of interpretation are often overlooked in traditional planning processes, which typically focus exclusively on the sender's needs and objectives rather than taking into account the recipient's situation. In the PAKI project, we hope to propose a planning method that challenges a transmitter-only approach in the planning of interpretation and underscores the value of imbuing the sender’s mission with an understanding of the visitor’s reality.

With three-year (2014-2016) funding from the National Heritage Board, the PAKI project is a collaboration between the Environmental Communication Unit and the Center for Nature Interpretation, both in the Department of Urban and Rural Development, SLU. Our team members include Hanna Bergeå, Elvira Caselunghe, David Forsander, Lars Hallgren, Eva Sandberg and Elin Ångman.

Read more about the background to this project:

– critical analysis of a transmitter-oriented approach to interpretive planning

Traditionally, planning for information dissemination at heritage sites has focused on deciding which ​​facts should be sent from a transmitter (e.g., the managing authority of a heritage site) to a receiver (visitors). Such a planning process assumes the recipient will simply assimilate the information the transmitter presents - and, by extension – that impacts on the receiver's attitudes and behaviors will necessarily follow. But empirical research does not support this chain of events, a realization that leads many analysts to conclude that this fact-teaching approach to interpretation has served neither the interests of heritage site planners nor those of the people who visit them.

Heritage interpretation may be presented to visitors in many different formats (such as guided tours, exhibitions and digital information). Certain aspects of the heritage relevant to a given site are selected for emphasis and conveyed to visitors through the information presented. Other aspects, however, are inevitably deemphasized or left out altogether, effectively “hiding” them from public consideration. Traditional approaches to planning for interpretation, therefore, run the ethical risk of dictating to Swedish citizens which aspects of their own heritage are worthy of attention.

- A didactic view of the communication process - where the goal of interpretation is often formulated as the participants' ability to remember the facts presented. In this view, interpretation is successful if a visitor can remember, for example, the name of a rock, which year a certain event occurred, the artist who produced a particular sculpture, and so on. Published evaluations of interpretation the past three decades have overwhelming used immediate factual recall by visitors as the main evaluative criteria (Ham 2007, 2013).

- A view of the audience as sponges - wherein visitors exposed to interpretation simply absorb the information they are presented and subsequently adopt attitudes and behaviors consistent with the information they absorbed. This naïve view is based on an empirically disproven model of communication that assumes information is transmitted by a sender topassive receivers. It sees interpretation as something that only an interpreter can do, and therefore assumes that visitors have no role other than to absorb what the interpreter tells them (which is sometimes called a “cybernetic” view of audiences as robots). And it ignores many dozens of published studies showing that audiences actually play a very active role in processing information as it is presented to them—a process that leads them to make their own meanings and arrive at their own subjective understanding of their heritage (Ham 2013, 2014).

To reiterate, these starting points are problematic, partly because research evidence simply does not indicate any relationship between participants' ability to recall the factual content of heritage interpretation and the transmitter’s goals of preserving and perpetuating cultural heritage, and partly because they lead to interpretive practice that is aimed at emphasizing certain selected facts over others rather than stimulating visitors to engage their minds and actively “co-construct” their own heritage.

The widespread adoption of these starting points in interpretive planning leaves the planner uncertain as to whether:

- Participants themselves can influence the meaning and values the assign to heritage places constructs and whether the interpretation is contributing to a participatory dialogue about cultural heritage values (a goal most heritage sites probably embrace).

The aim of the PAKI research project is to develop a model for planning interpretation that goes beyond the “didactic” and “cybernetic” views that have characterized much interpretive planning in the past. We propose a planning model based on a view of interpretation as a communication process in which the participants are seen as equal actors who actively define the situation in interaction with others and create for themselves personal subjective meaning through an interaction between the interpretation they are presented and their own pre-understanding of their heritage and their previous life experience.

Based on this perspective, the model we develop will encourage planners to consider:

- What are the specific goals and mission of their interpretation in terms of the interpretive products and activities they offer and with respect to the reflections and meanings they hope participants will construct in their own minds?

- How the form, content, and social interaction catalyzed by an interpretive product can facilitate (or hinder) meaning making by participants.

- How the form and content of interpretation presented by a heritage site can either reveal or conceal certain contexts and relationships that are potentially relevant, not only to visitors but to the wider community.

- What opportunities participants have to self-check and control which values ​​are reflected in interpretation activities they expose themselves to, and to understand and control how they are affected by the values ​​that are reflected.

The PAKI project has recieved a three-year funding from the National Heritage Board. The heritage sites participating in the project are Läckö Castle and Visitor Centre Vänerskärgården Victoria Hall, Visitor Centre Hornborgasjön, Visitor Centre Huseby and Huseby Bruk. 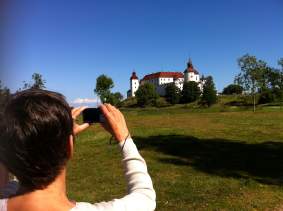 Sam Ham and Lars Hallgren are both involved in the PAKI project. Husaby in october 2014. Photo: Barbara Ham.