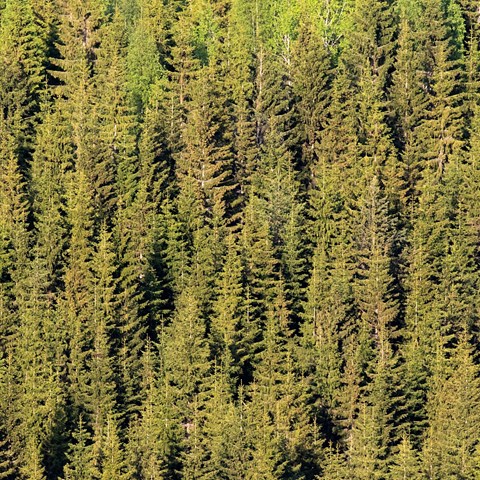 Evergreens dominant - but broadleaves are increasing
As for all forest land in Sweden, productive forest land is dominated by evergreen forests (82%) with scots pine the most common stand type (40 %). Worth noting is that the exotic species Lodgepole pine accounts for 2% of the productive forest land area, and this proportion in southern Norrland is 4%. Since the midddle of the 1980's the area of broadleaved dominated forest has increased in all regions except northern Norrland. Since 1985 and seen for the whole country the area of broadleaved dominated forest has increased from 6.4 to 9.4%.

Thinning stage forest is the most common
Maturity class is a classification of the forest from a forestry perspective. The dominant maturity class in productive forest land in Sweden is thinning stage forest (40%) and cirka 32% has reach the minium age for final felling. Approximately 6% of the productive forest area is thicket stage of which ca 78% is artificially regenerated and the rest naturally regenerated forest.

The steadily increasing standing volume is occcured despite the fact that the area of productive forest land has remained relatively unchanged and this has meant that the forests have become more dense. Standing volume per hectare is currently 142 m³sk per hectare and 141 m³sk  outside formally protected areas.

Continued increase in both growth and drain
Similar to standing volume, growth has increased steadily in Sweden's forests. However during the latest years the growth har reduced and is now 117 million m³sk on all productive forest land.

Forest damage
The Swedish National Forest Inventory registers damage to trees which could affect timber production or quaility. The lowest level of forest damage is found in younder spruce stands in northern Sweden (26%) and highest i young pine stands in northern Sweden (51%). The most common type of damage in evergreens is mechanical damage from wind and snow or grazing.

Number of living trees per 1000 ha by diameter class

Number of trees per hectare by tree species and age classes