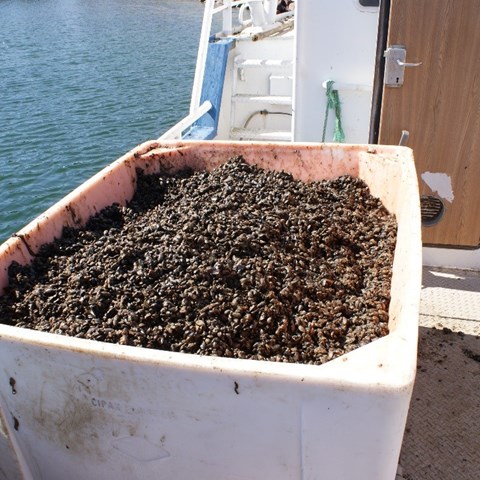 Harvest of blue mussels (Mytilus edulis) is a new method for reducing phosphorous (P) and nitrogen (N) loads in the Baltic Sea Proper. Previous experiments in the Baltic Sea have indicated that cultivation of blue mussels has potential to be a cost effective measure to reduce nutrient loads. There is currently no commercial market for blue mussels from the Baltic Sea. However, mussel meal can be used as feed for poultry and fish, a high value fertilizer on arable land, or for production of biogas.

Pilot Mussel has six contracts with mussel farmers in Sweden and on Åland, where the mussels will be harvested in 2017 and 2018. The plan is to harvest 134 tons of mussels in total, and the nutrient removal will then be estimated based on smaller samples from the harvests, where the contents are analyzed at SLU. The first harvest was carried out on Åland in May by Storfjärden Fisk and Åland’s Fish Farmer Association.

The economic support provided through this tender for mussel harvesting will potentially stimulate the establishment of mussel farms in the Baltic Sea. A larger harvest would in turn promote the establishment of a market for mussels. If the pilot is successful there might be an interest from public bodies responsible for the environmental state of the Baltic Sea to investigate the possibilities to introduce an environmental support system for mussel farming.