The field experiments within Theme 2 are mainly performed at SLU’s research park Svartberget in the county of Västerbotten. Several studies are concentrated in pine stands on poor and fertile soils at the research sites Rosinedal and Degermyren within the park.

The experiments performed at the sites span over a wide range of topics but the research in Theme 1 is focussing on N and C cycles. The whole ecosystem is studied, from C sequestration in the needles to the roles of the soil microorganisms. The results indicate that soil microorganisms to a large extent “lock up” N added to poor soils. There is an apparent immobilization of the nitrogen, which prevents the tree from absorbing it.

The trees can, however, take up a larger proportion of nitrogen added on more fertile soils. The microbe community on these soils has access to sufficient nitrogen for their own growth, leaving the excess available to the tree.

The project is also using the well-known experiment in Flakaliden, where the now 50-year-old spruce forest has been continuously fertilized since the experiment was established in 1986. In 2011 and 2012, annual variation in root physiology was studied along with RNA- and DNA-analyses of the associated microorganisms.

One essential contribution from Theme 2 is the development of new research methods and technology.

A new method for microdialysis allows a better estimate of the fluxes of inorganic nitrogen in the soil. The traditional method of studying soil nitrogen is restricted to estimates of concentrations at single time points. The microdialysis provides a better picture of what happens with the nitrogen after fertilization, and how the nitrogen flow rate within the soil is affected by factors such as soil temperature.

New methods for RNA- and DNA-analysis of roots and soil (metagenomics) have been developed within Theme 2. It is today possible to identify changes in gene activity in microorganisms associated with roots or needles. The methods have been used to study seasonal variations of soil, roots and needles at Flakaliden. 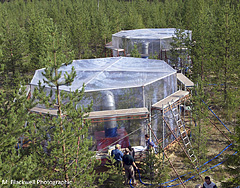