TC4F’s focus on regeneration means a new start in an area where SLU previously had a strong position. 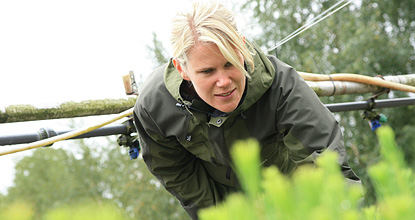 Research on forest regeneration (planting, direct seeding and natural regeneration) has a long tradition at SLU’s forest faculty. It was most intense in the 1990s, but during the 2000s it has had a more modest role. The applied management research has instead had a stronger focus on yield studies and modelling of already established stands. The reduced regeneration research has also led to fewer new researchers in this area.

The investments in Theme 3 have enabled a restart for regeneration research. There is a great need for more basic understanding of how plants react to management and disturbances, not least in the light of climate change. The following topics are in focus:

Why is pine growing better than spruce in northern Sweden?

Analyses of old research trials in the interior of northern Sweden have shown that Norway spruce growth is about 50% below that of Scots pine, and the difference does not change with soil fertility. A study has been initiated to investigate the reasons for this difference. Could it be due to different strategies in nutrient uptake? New trials have been established in the counties of Västerbotten, Småland and Skåne, where spruce and pine are compared side by side. The nutrient uptake is studied in more detail through measurements of nitrogen-15. The project is conducted in close collaboration with Theme 1 in TC4F.

What is the effect of various levels of ambitions in regeneration? This project analyses data from previously established trials in the counties of Östergötland and Jämtland. The trials, currently 30 years old, compare different site preparation methods and tree species (Norway spruce, Scots pine and lodgepole pine). The trials are unique since they are established as production plots, which enable the long-term effects on yield to be studied.

Many hope that somatic embryogenesis will soon have a practical breakthrough. A rational method for producing plants from embryogenic cultures would open enormous possibilities for mass production of reforestation material with desired properties. The technology is still struggling with bottlenecks at various stages of the embryogenesis. TC4F has invested in further research on the genetic regulation of the embryogenic development. The PhD student Tianqing Zhu examines in particular the role of genes in the group WOX, and also how these genes evolved in an evolutionary perspective. The PhD project is working closely with Theme 2 of TC4F.

Regeneration of trees: influence of climate, disturbance and ecological factors.

This project is described on a separate page.