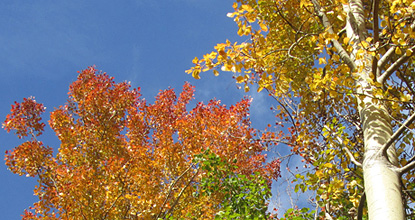 Aspen (Populus tremula) and other Populus species (poplars) are used as a model trees for molecular genetic research on forest trees – it’s the Arabidopsis for forest geneticists. The tree can also rather easily be cloned and grows fast, and it can easily be infected by the soil bacteria Agrobacterium. The soil bacteria has a natural ability to transfer genes, and thus can be used for inserting modified genes to make transgenic aspens.

A poplar was the third plant in the world whose entire genome was mapped, an effort where researchers at the UPSC had a prominent role. Now efforts are underway to identify genes that influence the tree properties. Leaf chemistry, leaf form, phenology, growth and wood properties are some examples where scientists are genes on the tracks.

TC4F financing includes laboratory personnel and a research assistant in the field. Moreover, TC4F has supported efforts to establishing field trials with genetically modified aspen. Including to apply for a more general permit.