One of the objectives of TC4F’s Theme 1 is to build bridges between the applied forest tree breeding, conducted at Skogforsk, with the biotechnology research at UPSC. 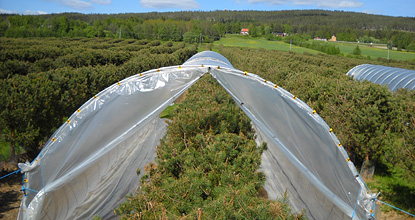 Isolation of seed orchard grafts to reduce contamination of external pollen, one of the studies conducted in cooperation between UPSC and Skogforsk. Photo: Ulfstand Wennström.

Skogforsk possesses huge resources of field trials and data in its tree breeding programs. Offspring from thousands of parent trees of Norway spruce and Scots pine are tested in the field, and the measurements are used to calculate breeding values for growth, survival, damage, phenology and quality traits. This data is extremely valuable when searching for relationships between genes and tree characters. Meanwhile, new molecular tools will be of benefit for the practical breeding. These include marker-aided selection, which has a potential to make the breeding more efficient.

The first conifer to have its genome identified was one of the Norway spruce trees in Skogforsk’s breeding program: clone Z4006 originating from Ragunda in central Sweden. In a second step, 2 000 offspring from Z4006 will get their genomes mapped. In a longer term, the goal is to extend the genetic mapping to the entire Swedish breeding population of Norway spruce. This means a total of at least 1 500 mother trees, and tens of thousands of markers.

Some examples of joint projects between UPSC and Skogforsk

Spruce phenology in a changing climate

Temperature effect on the rest, dormancy break, bud burst, growth, bud set and hardiness is studied in spruce clones. The mitotic index is analysed and used as a measure of growth activity.

A breakthrough of the SE technology would yield completely new opportunities for the mass production of the most advanced breeding material. Skogforsk and STT have several common projects to explore the impact of propagation, selection and plant development in the field.

Studies of the relationship between genes and traits

Several projects and field trials are used to examine the relationship between genes and wood properties of aspen and spruce. One study also concerns the relationships between pine weevil resistance and genes.

Size of the breeding population

Marker genes are used to analyse kinship, genetic variation and inbreeding as a basis for the design and dimensioning of the breeding and mass propagation populations.

Studies are ongoing on the effects of isolating seed orchard grafts in order to reduce contamination of external pollen. Molecular markers are used to identify the pollen sources.