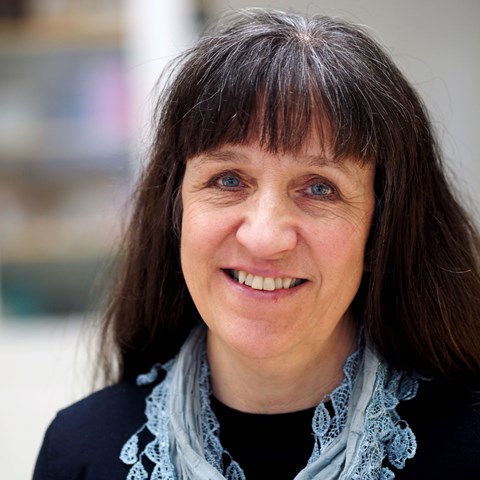 Marie-Charlotte Nilsson Hegethorn, professor in forest regeneration, is taking regeneration a step further. She is studying basic functions in the ecosystem to improve understanding of ecosystem relationships ahead of current challanges and tomorrow's climate change. Her research has shown how moss attracts bacteria to produce nitrogen and how crowberry uses chemical warfare to inhibit pine establishment. Now she´s studiyng how warmer climate and increased wild fire frequency will affect regeneration.

Marie-Charlotte's forest trail began while she was studying biology at Umeå University. After a summer job at the nearby SLU, Olle Zackrisson, professor in forest vegetation ecology, suggested she take up a post at the university as a doctoral student. In 1992, she was awarded a PhD, with a thesis examining the effects of crowberry shrubs on natural regeneration.

The crowberry may lie behind many unsuccessful regeneration attempts in northern Sweden. The shrub produces a toxin that is released and spread during rain and snow melt, and competes for nutrients and space. Marie-Charlotte showed that the chemical aspect (toxin) accounted for nearly half of the negative effect.

The toxin and the causal relationship was a novel discovery, but it has long been known that clearcut burning is a successful way to generate new forest in stands containing a lot of crowberry. This led to more detailed studies on the effect of forest fires, which in various ways has been a common theme throughout Marie-Charlotte's research.

"Fire helps to regenerate the entire ecosystem, and new pines quickly become established after a fire. Perhaps fire could be used more in regeneration, but it is a complicated method that requires knowledge and planning. Another question is the effects on climate, because a lot of carbon is released during burning. On the other hand, fire speeds up regrowth and the trees then absorb carbon. Here, we need to know more about the balances," says Marie-Charlotte.

One experiment on the same theme is to bury charcoal in the soil. It is assumed that it could lie there for thousands of years without decomposing, forming a carbon sink that retards the climate effect.

"We have an experiment running in the Vindeln research park. Five years ago, we buried six tonnes of charcoal on plots planted with pine. This corresponds to about ten tonnes of carbon per hectare. The method has many supporters in more southerly countries, but we don't know how well it works in our boreal forests. The charcoal also has a catalytic effect on the humus layer. The carbon, depending on its physical properties, affects microorganisms, accelerates mineralisation, and forest growth is stimulated," explains Marie-Charlotte.

A significant part of the puzzle, which Marie-Charlotte and her research colleagues discovered, is the importance of moss in providing nutrients to the forest.

"The source of nitrogen in old forests has been a mystery. Most is recycled when needles and other litter are broken down, but nitrogen is also supplied externally. Common red-stemmed feathermoss and glittering woodmoss play an important role. This is a refined system that we discovered in 2000, since when the research has generated more and more information."

"Over a hundred-year rotation period, over 20 percent of the nitrogen comes from the symbiosis between the mosses and bacteria," explains Marie-Charlotte, who describes a fascinating interaction.

The process is not continuous, and only takes place during certain periods. When it is time, the moss sends out signals that make the cyanobacteria form motile filaments (thread-shaped structures) that they use in movement. The moss then sends out another signal to attract the bacteria. On the moss leaf, these filaments develop further into cyanobacteria, which can trap nitrogen.

The whole process starts when the moss requires nitrogen for its own uses. Consequently, the process stops when the forest is fertilised, because the moss no longer needs to produce its own nitrogen.

The researchers are now trying to identify exactly what types of chemical signals the moss sends out.

"The mosses are very exciting. If you go out in a very old forest and measure the growth of stemwood and shoots, and compare the dry weight with the mosses and berry shrubs that are stimulated by the mosses, the productivity is approximately the same in the tree layer as it is in the field layer. The moss contains a microfauna with hundreds of species, ranging from nematodes to springtails and tardigrades. The extent to which the mosses' nitrogen fixation can be increased remains to be seen, but it's an exciting thought. We must build on this basic knowledge to understand and find new opportunities for the future," says Marie-Charlotte.

Marie-Charlotte is once again working with forest fires in another context, together with doctoral student Theresa Ibáñez, who has recently been employed via TC4F. In the area of the large forest fire in Västmanland, they are carrying out regeneration trials in greenhouses with open roofs. This simulates a temperature increase of a couple of degrees. In the greenhouses, three different provenances of spruce and pine are being tested. In addition to the trials on the fire area, the same provenance experiments are carried out in the adjacent forest, which survived the flames. The project involves both simulating climate change and managing regeneration after forest fires, as the risk of fires will increase as the climate warms.

"We need to carry out more practical trials to understand how the European forest reacts ahead of a warmer climate. There are many assumptions, but to build good models, we must use realistic trials and experiments. This is difficult research with many components, where temperature increase affects growth, insects, ground vegetation, parasites, fires and precipitation," says Marie-Charlotte.

She emphasises broadening the perspective regarding regeneration.

"New regeneration methods must be developed with greater flexibility, adapted to local conditions. To succeed with this, we must know more about complex causal relationships. We need to understand the trees in a broader context," says Marie-Charlotte Nilsson Hegethorn.