Genetic Tools for the Future 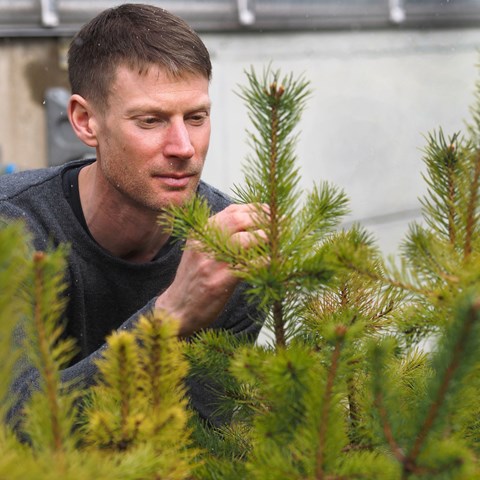 Using new genome sequencing technologies, Nathaniel Street is mapping a hidden world in the soil and around the roots of trees. Thanks to new technology researchers have identified thousands of different species of fungi and bacteria in the soil. By understanding the interactions involving these species and tree roots it may be possible to utilise the beneficial services these microbes provide to increase the growing power and resilience of trees.

Nathaniel likes to investigate complicated associations and to find patterns in what, at first glance, appear to be an incomprehensible mishmash. In other words, he has found his perfect niche as a researcher at UPSC (Umeå Plant Science Centre), one of the world's leading research institutes in forest biotechnology.

His research can broadly be divided into two areas:

• Surveying and understanding the interaction between fungi and bacteria, and how these interact with forest trees. Not so long ago, the species were counted in tens, but now thousands have been detected.

• Surveying and improving understanding of the spruce and aspen genomes, above all the complex association between different genes that give the individual trees their characteristics.

In both cases, he is totally engaged in bringing order to complex patterns. And, naturally, Nathaniel loves his job, along with the natural environment and the forest around Umeå.

It was the combination of outdoor life and the desire to learn how things work that led him towards forest genetics. Back home in Dorset in southwest England, Nathaniel reflected on natural associations during his many and long walks along the coast. With his interest in nature, biology was a natural choice in school. When later he had to decide on a specialisation, the choice was between animals and plants. In the end, he decided on plants, because of the greater capacity for experimentation.

He completed his PhD in 2006 at the University of Southampton. In the work for his thesis, he identified the genetic differences between two different types of poplar clones. One was extremely sensitive to drought, while the other was quite resistant. The interesting idea, of course, was to use genetic engineering or breeding to develop drought-resistant individuals, but the research was not taken that far. Instead, Nathaniel continued to work with poplar in a more practical way. He became advisor in a British project to cultivate poplar for bioenergy.

"It was fun and fascinating to work with the entire process, from cultivating poplar to visiting enormous heating plants where the chips were incinerated. But I was really more interested in research. My thesis and the energy project both brought me into contact with Sweden. When Stefan Jansson at UPSC offered me the chance to come here as a researcher, the choice was straightforward. This suits me perfectly," says Nathaniel.

He came to Umeå in 2007 at a time of breakthrough. New DNA sequencing technologies had given researchers a tool for identifying fungal and bacterial species in a completely new way. Comparisons of gene sequences revealed that the diversity of microbial species in the soil and associated with trees was vastly more varied than researchers assumed a few decades ago.

"Twenty years ago, there were a few tens of identified species, and ten years ago around a hundred. But thanks to rapid gene sequencing, we now know we're talking about thousands. We identify them and give them a name, which for simplicity is a number to start with. To give them a proper name requires more background information. The important thing is that we now know that they exist. What remains is to understand what they do and, not least, how they interact with one another. Knowing they exists also means that we can monitor the effects of human activity," says Nathaniel.

It has been known for a long time that tree roots live in symbiosis with certain fungi via mycorrhiza (structures formed between the roots and the mycelium of the fungus), which mutually benefits the trees and the fungi. But now it is clear that the interaction is very complex.

In addition to differences in the microbial composition in the symbiosis between spruce, pine and other tree species, there are also geographical differences. The microbial composition in a spruce forest in northern Sweden is expected to be different to that in a spruce forest further south, something that Nathaniel will be examining more closely next year.

He is currently collecting material from spruce and pine stands in large field experiments in Vindeln outside Umeå. DNA is extracted from soil and root samples for sequencing in an external laboratory. This will be followed by laborious work in front of a computer.

"In Sweden, we're at the forefront in work with coniferous forest, but naturally we're not the only researchers in this field. The same fungi are undoubtedly being investigated at several research centres around the world. We're currently in something of a pioneer phase. In the next step, I can see we'll be working together more, comparing results and drawing conclusions," says Nathaniel.

Many bacteria and fungi supply nitrogen to the tree and thereby promote growth, but there are also species that have a negative effect. The trick is to distinguish between them. One way to draw practical benefit from the beneficial fungi that the researchers identify could be to inoculate these species already at the planting stage.

In a neighbouring project with links to SLU, a rather revolutionary seed pad has been developed by the company SweTree Nutrition. This is a small tray that contains genetically improved pine seeds with a special long-acting fertiliser. The tray can attract water and provides good conditions for seed establishment in the field. Nathaniel's research group is now studying which fungi establish contact with the pine roots.

One other tangible result of the research can be to use soil analyses to monitor environmental change. Rich fungi and bacteria in the soil are directly linked to the vegetation and diversity of trees and plants.

"So far, we're only in the learning phase of surveying and understanding the associations between trees, bacteria and fungi. In the next ten years, we'll learn a tremendous amount. What happens in the soil will be a factor to consider in regeneration of forests," predicts Nathaniel.

Researchers at UPSC were the first to map the vast genome of the Norway spruce (seven times greater than the human genome).

"Even if everything is mapped, a gigantic puzzle is to link together all DNA sequences to long continuous strands. The aim is to produce complete DNA sequences for each of the spruce's 12 chromosomes. Since we're talking about perhaps a million pieces in the puzzle, it's a significant challenge, but we're well on the way and using the same methods is aspen, which has a much smaller genome, we have shown that this is definitely something we can achieve," explains Nathaniel.

When the complete picture starts to fall into place, the next challenge will be to understand how the genes interact. Nathaniel has studied which genes steer leaf shape in aspens. Naturally, from the forestry perspective, the appearance of the leaves is probably not of major importance, but aspen is a relatively easy tree to work with, and when researchers understand how it is all connected, this will form a springboard to other functions. Not least, the genetic interaction that steers growth.

"Leaf shape is determined by hundreds of different genes, and some genes seem to be more important than others. We're now finding differences and associations, which is very exciting. With that knowledge, we can move on to genetically modified trees, but it can also be a tool for directing conventional plant breeding. Because trees grow relatively slowly, it can take a long time to breed new generations. First, we must wait for the trees to flower, then the cross is evaluated, which together takes many years – or even decades. When we use genetic markers to find out about desirable traits, we can then select future trees at a much earlier stage," says Nathaniel Street, researcher at TC4F.