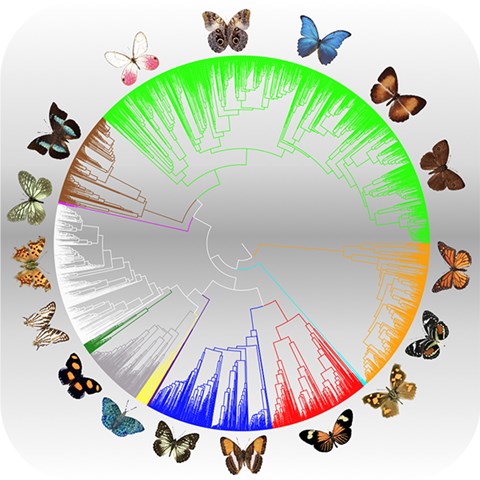 A 2800 tips, time-calibrated phylogeny of all Nymphalidae butterfly species sequenced to date.

When populations and species are facing environmental changes, they can only track suitable conditions, adapt to the new conditions or go extinct. These mechanisms, driven by biotic and abiotic factors have shaped the tree of life and the structure and functioning of ecosystems. But these same mechanisms also determine current population response to the ongoing global changes. Therefore, we need to understand the relative importance of the underlying drivers and how they can be generalized across time, space and taxonomic groups.

Our approach is to identify patterns of diversity and evolutionary processes at large geographical and temporal scale for groups of insects. We combine present-day species data with time-calibrated phylogenies to model past evolutionary changes. Phylogenies provide both a framework for taking into account the relatedness between species – hence the amount of shared evolution – and a time-scale to assess when certain events happened in the past. We combine multiple sources of information, including species distributions, climatic niche, interactions, host-plants, phenotypes to study the interplay between different components of insect ecology and assess their implications on population trends of extant species. Generally, these large-scale evolutionary processes are well studied in model groups such as vertebrates but poorly understood in insects. We mostly focus on Lepidoptera, since they are amongst the most documented group of insects and the amount of information available makes them best suited for filling the gap between model organisms and insects.

Over the last 10 years, there has been increasing evidence that populations of insects in Europe are on the decline. The magnitude and intensity of this decline is still controversial. To understand why population response to global changes varies between species and groups we need to consider both external and internal factors. External factors most frequently involve habitat loss, land-use change, agricultural intensification, climatic changes or chemical pollution, hence mostly anthropic perturbations. Internal factors instead, revolve around phenotypes, ecological traits and biotic interactions. According to the IUCN 2009 report, 31% of European butterfly species are declining and 19% considered as either threatened or near-threatened. European butterflies are well-documented and the amount of information available provides a unique opportunity to understand the relationships between multiple potential drivers of decline.

Insights from the past

Particular phenotypic or ecological traits of extant species have long been identified as potentially increasing the sensitivity of species to global changes. Typically habitat specialists are considered particularly vulnerable. Yet, ecological characteristics exhibited by extant species may not matter as much as their probability of evolving in response to these global changes. We can assess this evolutionary potential by inferring the ancestral ecological niche and estimating the past rate of niche evolution. In our work we try to include multiple dimensions to the ecological niche: climate, habitat and host-plants to assess, which of these best predict the current population trends in European butterflies. By inferring ancestral ecology and rates of evolution we can also try to predict population response in the future. Species having evolved fast in the past may be less sensitive to environmental changes but also more prone to adaptively respond in the future.

Phylogenetic information forms a cornerstone for our work. Nowadays, phylogenetic information plays a central role in the field of Ecology. Phylogenetic relationships account for the non-independence of between species. Phylogenies can be used for inferring past evolution by modelling phenotypic and ecological trait evolution. But phylogenies are also very valuable as a metric of diversity, used for example as a community diversity index or for conservation purposes. They can be reconstructed for specific groups of organisms or at the community level. For plant feeding insects such as the butterflies, phylogenies of host-plants are also extremely valuable. They can be used for estimating ancestral host-repertoires, measure the breadth of a butterfly host-repertoire or the similarities between host-repertoire. For example, we now have a complete time-calibrated phylogeny of the European butterflies, which provides a unique opportunity at the scale of a continent to study diversity decline form a phylogenetic perspective or investigate trait evolution. Generating new phylogenetic resources at different geographic and taxonomic scale is a central part of our work.

To understand the structure and functioning of modern ecosystems we are taking a historical approach by (1) identifying large-scale patterns of diversity and (2) assessing the relative importance of different mechanisms that shaped these patterns. The species pool of a region is basically the results of three processes: speciation, extinction and dispersal (in and out of the ecosystem). Identifying how each of these processes has varied though time, space and taxonomic group is at the core the macroevolutionary field of research. Besides, we are aiming to also identify the underlying drivers of these variations, typically environmental changes, phenotypic and ecological traits or geological events. We address these different topics at different geographic and taxonomic scale.

The distribution of species richness around the globe is not even. However, patterns of diversity tend to be similar between clades, including distantly related ones. The Latitudinal Diversity Gradient is probably the best known such global pattern, as it builds on species richness within several different clades all decreasing from the equator towards the poles. Insects are no different and usually exhibit a decline in species richness with latitude. Using time-calibrated phylogenies combined with species distribution data and phenotypic information we can model past dynamics of speciation, extinction, dispersal between regions, phenotypic diversification and assess their relative contribution the global patterns of diversity. We are also interested in understanding the interactions between them. We showed for example that wing size and wing shape evolution in some butterflies is tightly linked to habitat and host-plant use, but also correlate with changes in speciation/extinction dynamics.

Neotropical diversity: why so many species?

At a more refined geographical scale we focus in particular on the Neotropical bioregion. The Neotropics are considered as the most species rich region on Earth. In butterflies, it is estimated that at least one third of the species are found in that region only. The origin of all that diversity is controversial, and many hypotheses have been proposed over time. Different researchers have pointed to a role for the Andean uplift (creating the conditions for allopatric and ecological speciation), a role for climatic stability (allowing progressing speciation) or the effects of the most recent glaciations. To understand the origin of this biodiversity we focus in particular on understanding the role of the interaction between the Andes and Amazonia and the environmental changes that occurred throughout the Miocene. The Andes may have played an important role for creating the conditions for speciation along an ecological gradient but also as an ecologically stable area when the Amazon basin was partly covered by lakes, swamps and marine incursions during the Miocene. 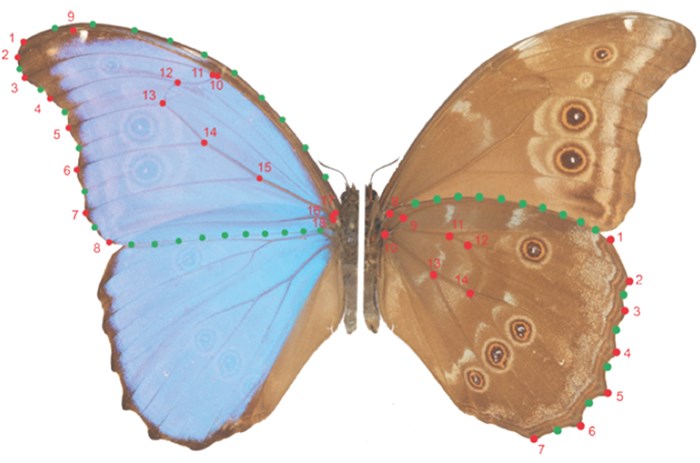 Dorsal (left) and ventral (right) side of a Morpho butterflies with an example of how the shapes of the wings are quantified. Red and green dots are landmarks that are manually digitized on photos. The relative position of these landmarks can be compared across individuals and the shape variation quantified. 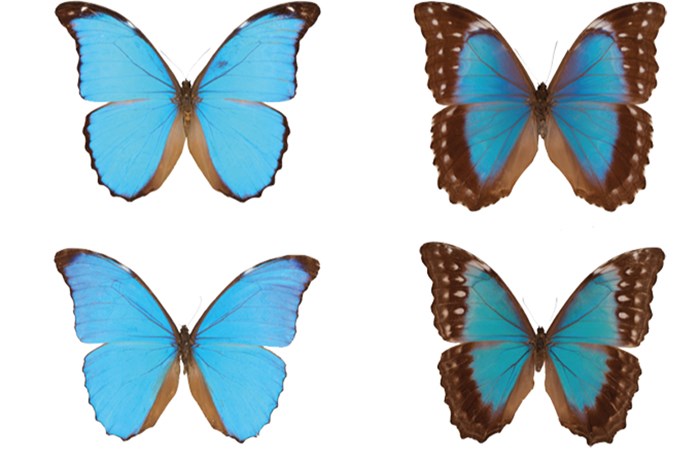 Specimens of butterflies belonging to the genus Morpho. Morphos are found in Central and South-America and are well known for the blue iridescence coloration that some species harbor. 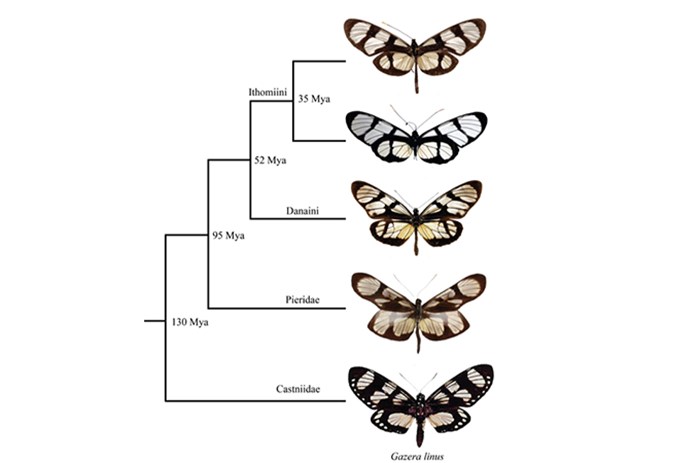 An example of Müllerian mimicry involving different species across Lepidoptera. The two butterflies at the top belong to the tribe Ithomiini. The Danaini and Pieridae are also butterflies (Papilionoidea), but the bottom individuals is moth. All species share a same color pattern, which advertise the predators about their unpalatability, but this convergence happened between taxa that diverged from each other a very long time ago. Numbers at the nodes indicate an approximated age for their divergence in million years (Mya). 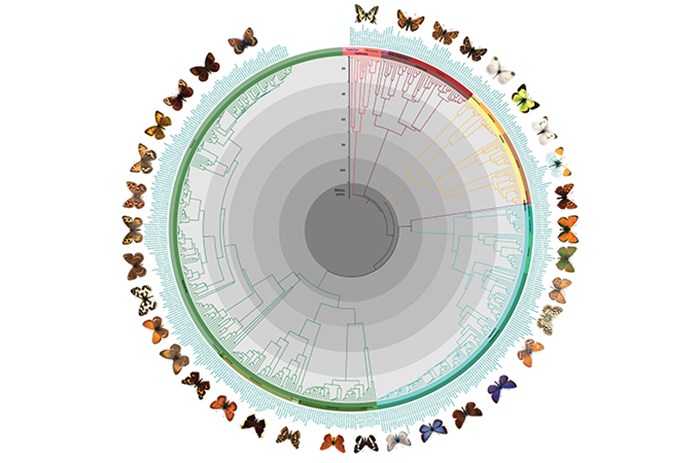 Müllerian mimicry in butterflies: the case of Ithomiini

Müllerian mimicry in Lepidoptera is a phenomenon in which species that are all chemically defended advertise their unpalatability via wing color patterns. Species coexisting and sharing the same color pattern benefit from the presence of each other (mutualistic interaction). This leads to natural selection driving evolutionary changes and convergence in color patterns between coexisting species. Müllerian mimicry has evolved independently multiple times across butterflies but one of the most remarkable case of Müllerian mimicry in butterflies in the tribe Ithomiini. Ithomiini belong to the family Nymphalidae and subfamily Danainae. They consist of almost 400 species all distributed in the Neotropics and all engaged in Müllerian mimicry. These taxa originated about 26 million years ago, and about 40-50 colors patterns have evolved throughout their history. Some color patterns are only represented by a single species while others are shared across more than 70 species. Ithomiini are at the core of mimetic butterfly communities in the Neotropics and they interact mutualistically with multiple groups distantly related, including moths, but also drive the evolution of Batesian mimicry, in which palatable species mimic unpalatable ones to benefit from their protection. Therefore, Ithomiini constitute a fundamental component in ecosystem interactions.

Mimetic interactions affect populations in many different aspects. We have evidence that mimetic interactions drives convergence of microhabitats, host-plants and altitudinal niche as the results of selection favouring the coexistence of mimetic species. Mimicry also drives convergence in wing shape. Important studies in another group of mimetic butterflies, the Heliconius, have shown that color patterns are involved in pre- and post- zygotic barriers, and thus can drive reproductive isolation and speciation. We now know that these positive interactions are highly influential on the distribution and evolution of these butterflies and we continue to uncover these effects at multiple levels.

Most of what we know about the evolution of mimicry revolves around microevolutionary processes, at the population and community level. There is little to no information about how these networks of interactions have diversified throughout the history of these mimetic groups, for example how frequently new patterns have emerged over time or why are some color patterns so species rich while other are only found in single species. By inferring the evolution of mimicry over geological time-scale, we can shed light on the evolutionary mechanisms shaping these networks on mutualistic interactions.