LIFEPLAN is an ambitious project aimed to generate the data, methods and conceptual synthesis needed for a new understanding of global biodiversity. To this end, we have teamed up with research teams across the world to generate fully standardized data across 200 globally distributed sites, and the statistical methods needed to distil ecological insight from these data. At each sampling site, the local project participants will use five sampling techniques to generate samples of DNA, audio and images. Using automated species recognition, we convert these samples to records of global biodiversity. The Swedish team is responsible for coordinating the global sampling effort.

In LIFEPLAN, we bring together the key expertise needed to generate and interpret Big Ecological Data for a global synthesis of biotic patterning across our planet uniting community ecology, methods for automated species recognition, and Bayesian statistics for immense data.

Our objectives are to generate a new understanding of biodiversity patterns and dynamics by developing fundamentally new methods for big data statistics. To this end, we will generate fully standardized, global big data on a range of species groups, thus allowing quantification of variation in ecological communities from a local to a global scale (from 10-1 km to 104 km), across tens of thousands of species. To distil ecological insight from these massive data, we develop big data statistics as well as methods for automated species identification from DNA, audio and image samples.

As a basis for the whole LIFEPLAN venture, we are generating well-standardized global data for a substantial proportion of all species, ranging from microbes to vertebrates. The standardization of species-level information is achieved through semi-automated methods, producing comparable data independent of the exact expertise of the person or team conducting the sampling.

The overall approach was made possible by a recent revolution in sampling methodology, and by the joining of forces of researchers across the world. Rather than centralized sampling by teams sent out at immense cost, LIFEPLAN is built on the local commitment of teams around the world, with a self-driven interest in understanding their local biodiversity. At present, researchers in 53 countries on all continents have signed up to LIFEPLAN, yielding unique coverage of the globe. 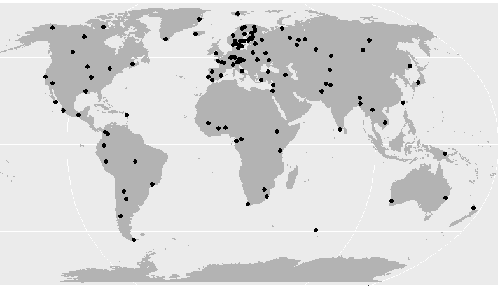 The funding of LIFEPLAN derives from the ERC Synergy Grant scheme. In brief, these grants build on groups of two to four principal investigators, teaming up to closely collaborate on a major initiative of transformative research.

Professor Tomas Roslin (Swedish University of Agricultural Sciences, SLU, Sweden) focuses on global patterns in biotic organization, including species richness and biotic interaction strength, and has recently engaged in the generation of massive data sets through distributed sampling designs. Beyond the PIs, the LIFEPLAN venture critically depends on hundreds of dedicated researchers around the globe.

No part of LIFEPLAN would be possible without the dedicated contributions by research teams around the world. These teams include nationally and internationally renowned experts of different species groups, and all sampling depends on their investment of time, expertise and local knowledge. In return, each national team is involved in exposing both local and national patterns in biodiversity unachievable by any other approach.

As its guiding principle, LIFEPLAN is committed to Access and Benefit-sharing. As parts of this commitment, the project offers workshops on both sampling and data analysis methods, and shared access to all data generated in the project. All analysis and publication of data are conducted in collaboration with the contributing teams. Our aim is to further equality in biodiversity science, by providing new methods for insights for all.

The lifeplan-team in the field