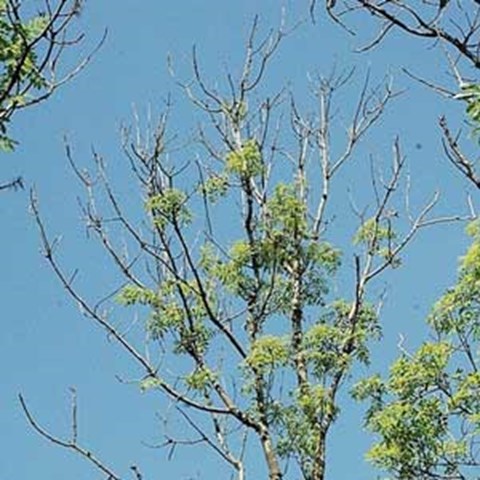 Most part of the species that follows human transports, animal migration and distant air-and water-flow from one part of the world to another remains unnoticed. However, in special cases one single introduced species can make a great difference, if certain criteria are filled.

We are also investigating a new pine needle disease caused by the fungus Dothistroma pini, which at the moment spread through Europe. The research stretches from populations studies, to various biological and biochemical approaches of the fungi.

Currently, severe dieback of Fraxinus spp. is observed in most European countries. This is an emerging disease, which results in massive tree mortality, threatening the existence of Fraxinus over the continent. It is caused by Hymenoscyphus pseudoalbidus (currently known as Hymenoscyphus fraxineus), an alien and invasive fungus that originates from Far East Asia.

Today, many European countries have national research programs on Fraxinus dieback, focusing on numerous aspects of the biology and ecology of the disease, but the activities are scattered. The project FRAXBACK aims to share and synthesis available knowledge, generate comprehensive understanding of Fraxinus dieback phenomenon, and to elaborate state of the art practical guidelines for sustainable management of Fraxinus in Europe.

A part of FRAXBACK is the book Dieback of "European Ash(Fraxinus spp.) – Consequences and Guidelines for Sustainable Management". In addition, a special issue of Baltic Forestry on ash dieback titled "“Advances in Ash Dieback Research– and Some Other Invasive Diseases of Trees” is out.

Risk assessment of plant pests - perform independent analyses which will provide support to the Swedish Board of Agriculture in their effort to counter the damage of alien fungal pathogens.

Fraxback - A collaboration to share knowledge about the Fraxinus dieback phenomenon, and to elaborate practical guidelines for sustainable management of Fraxinus in Europe.